The bombardment warships for started up around 0500’ish. These vessels were HMS Warspite, Ramilies and the monitor Roberts. The Warspite alone fired over 300 15” shells in two days. In less than a week she had to withdraw to have new gun barrels fitted and re-ammunition! There were also waves of bombers and gliders going over to drop paratroops to secure vital areas ahead of the main landings. Destroyers and landing craft close inshore were making a smoke screen to conceal the build up of the fleets of landing craft. From out of this smoke came a number of German E boats. They dashed in and fired off eighteen torpedoes in all. Two were aiming at the Largs but a fast thinking Officer of the watch rang ‘Full Astern’ and this meant the torpedoes  just passed a few feet ahead of the vessel. Unfortunately the Norwegian destroyer Svenner was not so lucky and at least one of the torpedoes struck her amidships. She was no more than 200yds on the Largs port side. The Svenner immediately broke her back and folded in half forming a ‘V’. She sank until she was sitting on the bottom with her bow and stern still showing above the water. There was high loss of life due to the speed of the sinking. Just after the sinking of the Svenner HMS Wrestler struck a mine again very close to the Largs. She sustained major damage and had to be towed back to and was never repaired. 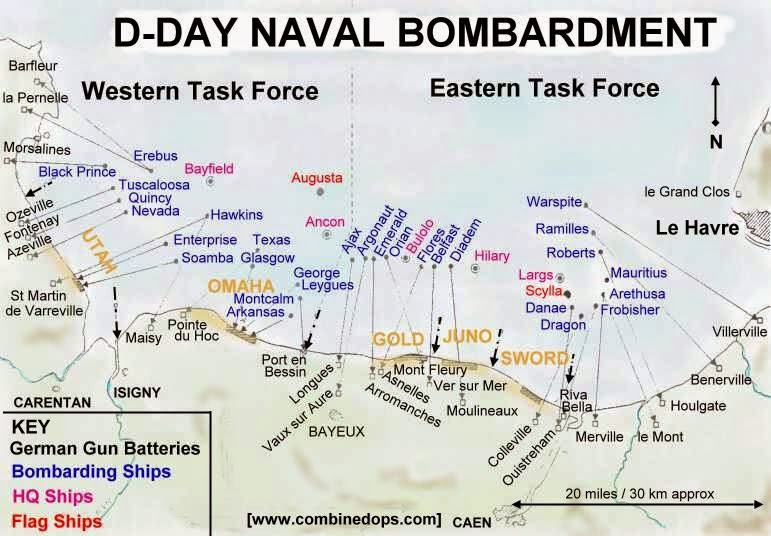 The Normandy Landing beaches and positions of major Naval units on D Day.
Actual H Hour for Sword beach was 0725, (the different beaches had different H Hours as the tide time was different for each of them) and by 0600 the Landing ships were embarking their troops into the smaller craft and assembling them ready for the assault. At about 0800 the Midget Submarine X23 was alongside the Largs. She had been laying just off the beaches for more than 48 hours to mark the way for the incoming vessels. The sight of the small landing craft streaming towards the beaches must have been a fantastic sight. There were over 2000 of these boats built during the war and 371 lost, 267 in 1944. They were made of teak hardwood with some armour plating. They were 12.6m long and 3m wide and a draft of only 1.5m. They could carry 36 men, a platoon plus, with a crew of 4 at a speed of 7kts. The troops had benches to sit astride and could exit in minutes through the bow doors. One was blown up by a mine just a hundred yards from HMS Largs. 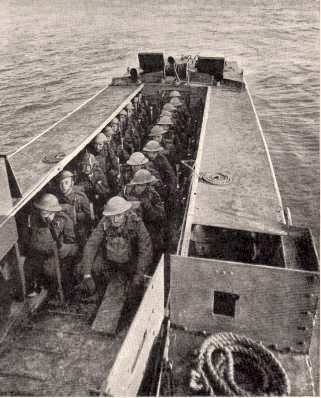 An early model LCA the turret is the Bren gun position. The Coxwain’s position was on the st’bd side. One of the two steel doors, that were just inside the bow ramp can be seen open. The ramp was operated from aft where the Stoker sat between the two V 8 petrol engines. 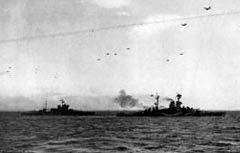 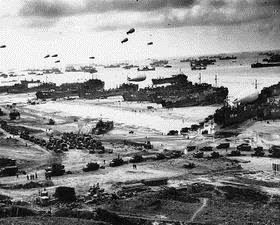 
At 0900 the Largs moved closer inshore to be able to more easily fulfill its role as HQ Ship for and the Commanding Officer of the 3rd Battalion went ashore. Throughout the day gunfire from the German heavy guns around would land around the Largs. The bombardment Naval Vessels would then respond to shut them up. HMS Rodney and assorted cruisers joined in. There were regular sorties from planes going in to on bombing raids and Landing Craft (Rockets) would shoot off their 100 rocket salvo in minutes. The beaches had the benefit of constant fighter cover and later in the evening there were several waves of bombers and then bombers with their gliders, maybe 300 of each. They were very low and the German flak was bursting around the gliders as after they were released they circled losing height and tracer was running up to them. One of the tow aircraft, a Sterling bomber, was ditching with its engines on fire and finally crashed about 100yds from HMS Largs. That first night there was an air raid warning and they made smoke. One bomb landed close to the st’bd side. The noise of the battle must have been deafening and when the air raid was in place the sound and sights must have increased. The tracer crossing the skies with flares being dropped and the gleam of action ashore and flash of the capital ships gun salvos must have made sight not to be forgotten.
Posted by NB Holderness at 07:16