Force S was the force that was designated to take . This was the most eastern of the landing beaches and could be the most crucial as this would be where the Panzer tank reinforcements would first make an impact on the battle to create a bridgehead. The Sword landings were to take place along a front of 5 miles. The Eastern Task Force covered Sword (British), Juno (Canadian) and Gold (British) Beaches, east to west.  Apparently these beaches were to be called Swordfish, Goldfish and Jellyfish, but Winston Churchill said that if men were to give their lives on the beaches they shouldn’t be named after fish. The western Task force was American and the beaches were called and (east to west).
It is well known that the invasion was supposed to take place on 5th June but had to be postponed due to a summer storm in the Channel. Even the following day the soldiers in the flat bottomed landing craft suffered badly from seasickness, and no doubt some were extremely glad to see the land, no matter what reception awaited them. The majority of the invasion fleet were embarked on the night of the 4th June. They eventually left on the 5th. All ships passed through area Z (called Piccadilly) from where they made for their separate beaches down buoyed and lit channels through the German minefield. These had been cleared by minesweepers just ahead of them. Ten channels of 600 feet wide were swept through the minefield and marked with small light buoys for the following ships. Two midget submarines, the X20 and X 23 were used as light vessels to mark the way with green lights.
I haven’t found any evidence of how Dad spent the build up to D Day, but he was allocated to the Staff of the Flag Officer Commanding Force S from the middle of February 1944, which I take to mean working for Rear Admiral Arthur Talbot above. He would have been practising on his equipment for codes and cypers and more than likely being involved in the various scenarios that were envisaged. For D Day Rear Admiral Talbot was to be aboard one of the HQ ships, to be stationed off . The role of the HQ ship had evolved from bitter experience of past raids and landings. It was found that there was greater need of coordination of the army, air force and navy at these crucial chaotic times. It was essential that each could talk to the other and that each understood the needs of the other. This was one reason why Combined Operations Command was set up by Winston Churchill in 1940. Admiral of the Fleet Roger Keyes was it’s first head until Lord Louis Mountbatten took over in 1941.

A Combined Operations Command team for communicators were placed on an HQ ship so each would be able to direct their own forces but could easily interact with the others to enable plans to be quickly changed when things went wrong and to quickly take advantage of a situation when things went right, or targets of opportunity presented themselves. To this end they were linked with observers ashore and the actual ships and planes. They could tell landing craft to move further up the beach, or naval bombardment vessels to direct fire to a particular fortification, or receive signals from spotter aircraft etc. They were of course also linked back to the Flag Ship of the Task Force and back to the . One of the HQ ships recorded 2300 messages a day! That is one or two every minute of the day. Therefore it can be seen that Dad would have to learn quite a lot of new things as well as get very proficient at his job.

HMS Largs in Largs Bay Jan/Feb 1943.
Rear Admiral Talbot’s  HQ ship was to be HMS Largs. Largs started out as the Charles Plumier (named after a French Botanist), built at Port du Bouc near Marseille, as a fruit carrier. At the outbreak of the war she was requisitioned by the French Government for duty as an armed auxiliary cruiser (X-11). With the invasion of France by the Nazis and the setting up of the Vichy Government the Charles Plumier was seized by HMS’s Faulknor and Forester 110’ off Gibraltar. She was then converted into an HQ vessel. She was re-launched using a bottle of rum. I think she was in dry dock at Birkenhead at the end of April Beginning of May and then moved to where she spent most of the next five weeks alongside the Railway Pier.
I can’t be sure when Dad joined her, but if he joined at the same time as the Rear Admiral it is likely to have been fairly close to the time of departure. However it could have been that the lesser staff were aboard much earlier so as to integrate with each department and to set up the systems etc. If this was the case there is every chance that Dad was aboard on 25th May 1944. HMS Largs moved out into the to anchor and there they had some VIP visitors in the shape of King George VI, with Admirals’ Ramsay, Vian and Talbot. Before sailing Winston Churchill, Field Marshal Smutts and Aneurin Bevin (Foreign Secretary) also came aboard. As Churchill stepped on to the wharf after the visit he turned back to the ship and doffed his hat in salute to the crew 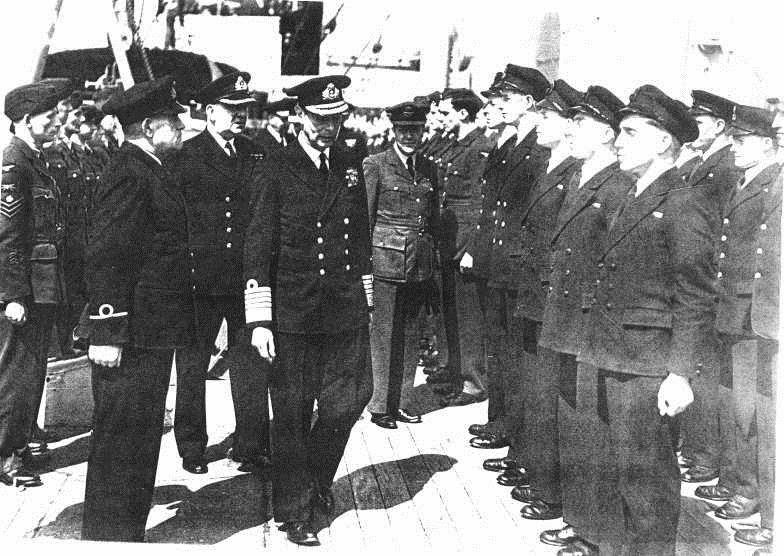 King George VI visiting HMS Largs in the 25th May 1944.
The next time that HMS Largs moved from Portsmouth was on Monday 5th June 1944. This was the start of the ‘Longest Day’ and Dad was seeing it at first hand. They were anchored in the as slower ships passed out to sea. They weighed anchor and moved out at 2130 along with a couple of Landing Ship Infantry vessel. These were ex cross channel ferries that had been converted to carry troops close to the beaches and then lower them in their landing craft to directly assault the beaches. They were escorted by destroyers and MTB’s (Motor Torpedo Boats). Their first objective was ‘Piccadilly Circus’ which was the assembling area for the convoys to set up and head up the ‘spout’ for their individual beaches and through their designated swept and buoyed channel. (See The Routes to map in previous blog). There were at ‘action stations’ from 2300 on 5th June.