In the early hours of D Day +1  the code for the approach of enemy E Boats was given (Influenza) nothing came of it but all would have been tense and I suppose that it would have just added to the tiredness of those aboard. About this time a low flying plane was shot down and crashed near the Largs. It was later found that it was actually carrying paratroops. I wonder if this was felt as a disaster for the Combined Ops on the HQ Ship as there job was to try and prevent this sort of thing happening. The person nominally in charge was put on a charge but exonerated at the hearing. The shore glowed with an incandescent light as the rockets from the landing craft had phosphorus warheads. The noise was added to when HMS Rodney was blazing away with her 16” guns right over head of the Largs from 500ft away. The vibration and noise were shattering. During the day the enemy batteries around and the rest of the coast would range in on the ships anchored off the beaches. When they got a bit close to Largs they picked up the anchor and just steamed around in circles around their allocated spot. ‘Action stations’ were called in the second day as there were warnings of glider bombs being directed at them. Through out the first week the signallers were doing four hour watches, watch and watch about, so they would have been extremely tired as the noise would have made sleep difficult at the best of times.
The early morning of D Day +2 saw the Largs called to action stations as there had been a warning of glider bombs being aimed towards them but nothing came of it. During the day Rodney and Ramilies were still finding targets ashore. The crew of Largs were witnesses to 100’s of bombers going over head and the air war got a little too close to them when a pair of FW109’s broke through in the afternoon and attacked. One of them was shot down and the pilot was picked up and taken aboard the Largs.
From D Day +3 things started to quieten down but on D+6 dive bombers again attacked the ship which came through unscathed. A few days later they managed to detonate a mine but only minor damage was caused to the hull. They had lived a charmed life until a German battery that was still active around Honfleur managed to find their range and they sustained a 4 foot hole just above the waterline. This was quickly repaired at sea by a small repair ship coming alongside and drilling holes and holding a plate up to the hole and bolting or riveting it into place! This was fortunately the last damage done to the ship. As the beachhead was extended, and the frontline got further from the beaches, the ships standing off were released. On D Day +24 HMS Largs sailed back to . I suspect that Dad stayed with the vessel until it went up to Greenock on the . Here it was repaired and updated and made ready for it’s next landing which was to be the invasion of . Dad’s file says that he left the Staff of the Naval Force Commander Force S on 6th July, a month to the day after the landing. HMS Largs sailed from Greenock on 18th July for the trip to the .
Dad won no awards or medals for his part in the . He won no Mention in Dispatches, but like the vast number of other participants he got the grateful thanks from a whole nation and the high appreciation of his Admiral. 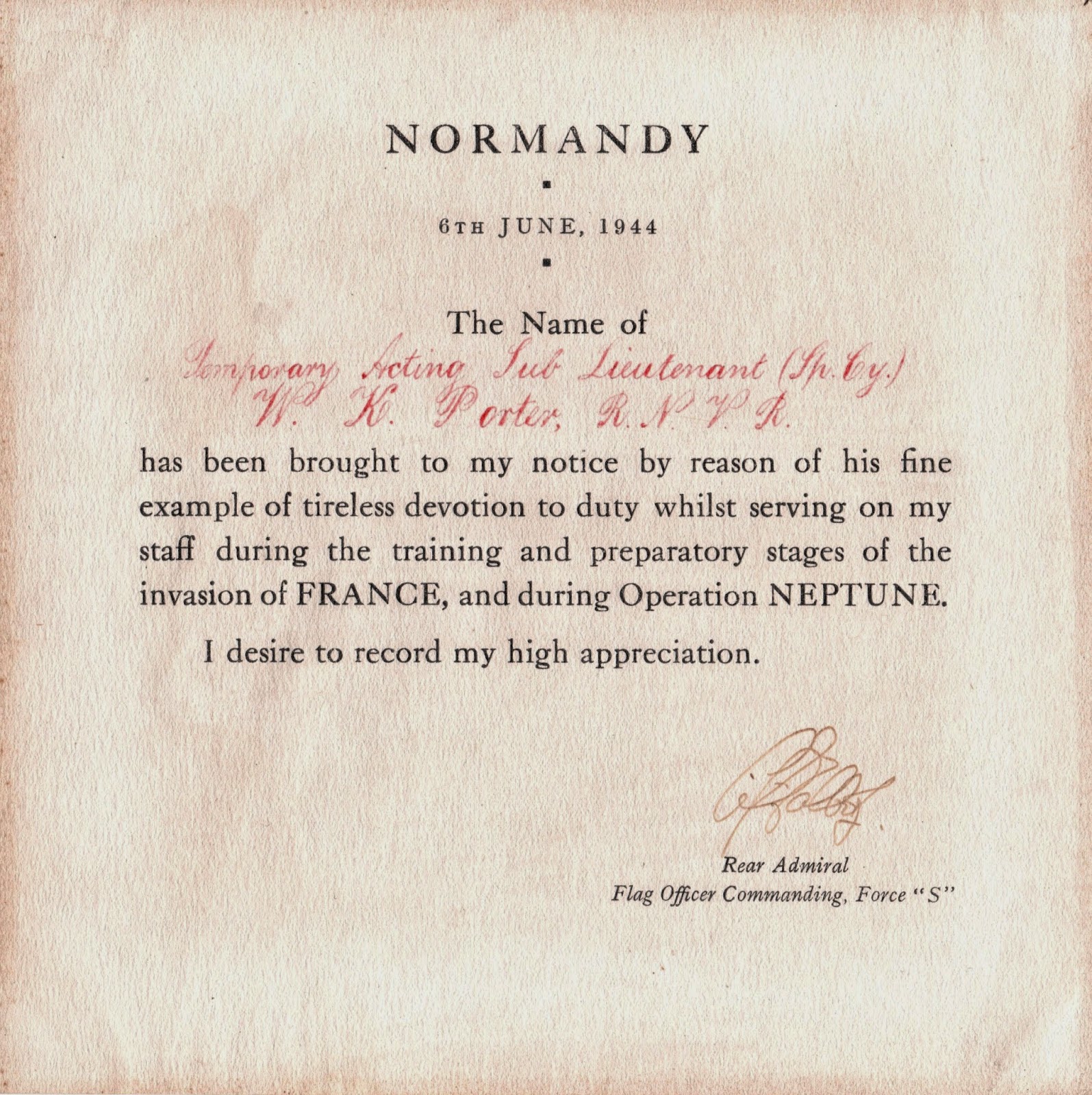 There is a personal report S206 for dad for the period of his appointment with Staff of Flag Officer Commanding Force ‘’S’’. 15th Feb 44 to 6th July 44. The reporting Officer is Captain A. Duckworth for Rear Admiral Commanding Force ‘S’.
He is reported as having satisfactory general conduct (rather than unsatisfactory) and to be of temperate habit.
His Professional Ability is 5, Personal Qualities 4, Leadership 4, Intellectual Ability 5, and Administrative Ability 4. (Out of 10).


The general Opinion of the Officer is ‘A hard working officer who pulled his weight in the Cypher organisation of H.M.S. Largs during Operation ’. He is recommended for promotion in the ordinary course! Not exactly a glowing report!!
Posted by NB Holderness at 09:31