Prior to the Japanese Occupation Hong Kong was governed on the usual Empire lines with the expatriate British ruling and using certain ‘classes’ of locals to support them, but a strict segregation was maintained. There were separate clubs, strict segregation of living areas and similar governance as India and Africa. David McDougal as Chief of Civilian Affairs was very forward thinking and he and his team were determined to rebuild the administration on new lines where the local Chinese were given much more say in their own governance and day to day life. The fact that this started under a Military Administration may well have helped enormously as the Foreign and Colonial Office in London, who may well have tried to prevent changes along these lines, were side lined. As it was Admiral Harcourt was also keen to ensure that a new system was introduced and as he and McDougal had the high regard for each other Harcourt was able to rubber stamp many new measures that may not have so easily passed the scrutiny of the Government in London.

Duncan Macintosh and his civilian team had done such a good job of setting Hong Kong on its new road that on 1st May 1946 the Military governance of Hong Kong was ceased and control handed to a civilian governor. The new man was Sir Mark Young. He had been the governor at the fall of Hong Kong and had been detained in the prison camps on the island. After the Japanese surrender he had returned to the UK to recuperate, and then eventually come back to take over from Admiral Sir Harcourt. Young was also in the mould of Macintosh and wanted reform. He had tried to have the Territory ruled by a 30 man council with no Governor veto. This was finally quashed when there was fear of Communist insurrection after he had left the post in 1947.

Hong Kong Waterfront 1945.(From photos Dad brought back with him). 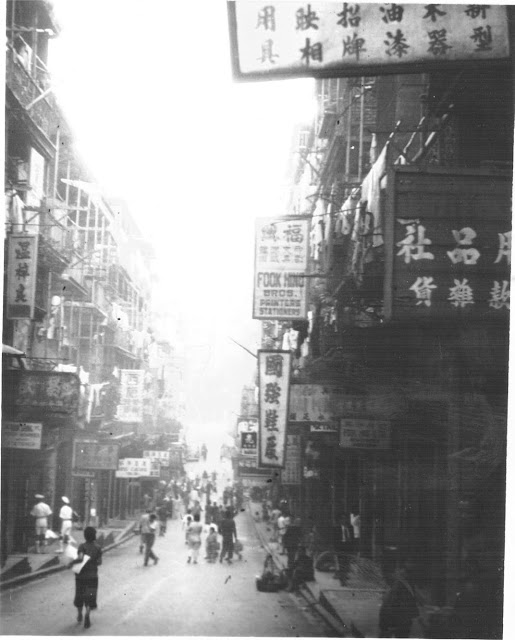 Demobilisation of the British Armed Services actually started 18th June 1945. The first men to return to civilian life where those with talents that were required quickly at home to help win the new peace. These men were designated as Class B. The vast majority of men, 90%, were Class A and to make things as fair and visible and open to all the plan had been published well before it had commenced. The criteria were basically your age and the length of your service. You entered a table with these values and you could read off where you were in the pecking order. Dad would have been in group 37 which is just about half way as the groups went from 1 to 75. Mind you there was no dates attached to this and the plan ran as and when it was possible. In the Far East the priority for transportation had been to return prisoners of war and other displaced people. Obviously there was a shortage of ships to move large numbers of personnel about and actually the aircraft carriers that had fought the Kamikazes were pressed into acting as troop ships. I can find no indication of how Dad got from Hong Kong to home as there are no troop ships listed as sailing at the appropriate time with a credible arrival in the UK. However it turns out that Dad may well have travelled home in a war ship, HMS Duke of York.

HMS Duke of York was the flag ship of Admiral Sir Bruce Austin Fraser who was the Commander in Chief of the British Pacific Fleet from December 1944. This was a shore based job from Australia but in August 1945, the day the atom bomb was dropped on Hiroshima, he joined the Duke of York that had just joined the fleet. Admiral was no stranger to the Duke of York as he had carried his flag on her when the Scharnhorst was sunk on Boxing Day 1943 off the North Cape of Norway. This duel between the Battleships Duke of York and Scharnhorst was the last ever between capital ships. For this action Admiral Fraser was honoured and was honoured with the Order of the Bath. 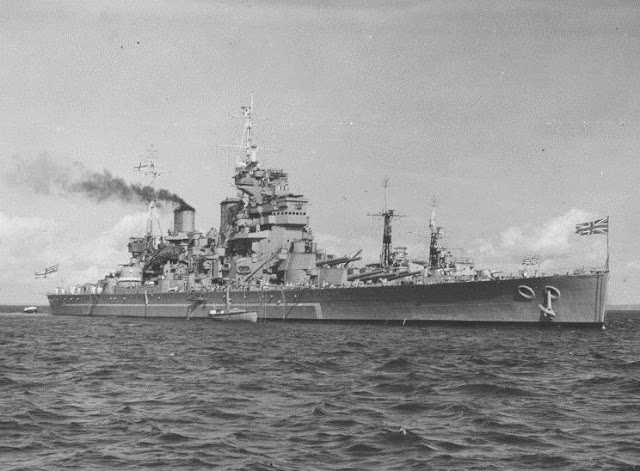 HMS Duke of York at anchor in Tokyo Bay 2nd September 1945 for the signing of the official Japanese Surrender.