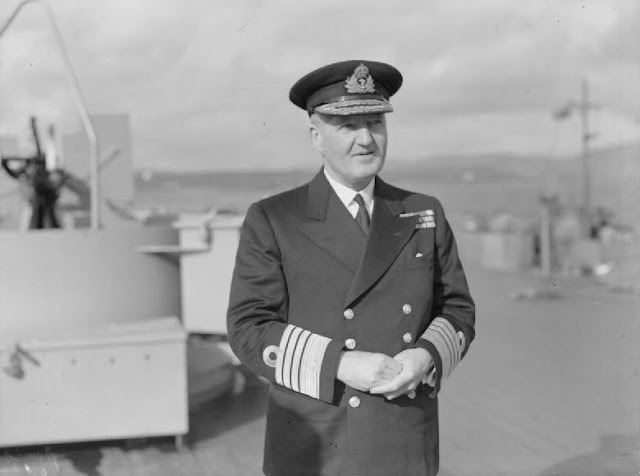 Admiral Fraser joined the Royal Navy in 1902 and was at Galipolli. After the war he volunteered to assist the White Russian Fleet in the Caspian but was arrested in Baku and imprisoned for several months. We had several appointments as gunnery officer so will have been well pleased with the accuracy of the shooting during the battle with the Sharnhorst when he was Commander of the Duke of York when his unit intercepted the German vessel as it tried to destroy an Arctic convoy. Around 75 salvos were fired and around 30 were said to be straddles of hits.

The Duke of York arrived in Hong Kong on June 7th 1946 and Admiral Sir Bruce Fraser boarded the vessel. I have no proof that Dad joined the vessel at this, or any time, but the subsequent dates fit in so well that bit is hard not to draw that conclusion. Mum also recognises the name so maybe it is the route he came home. If this is the case there is another mystery as there are two reports on Dad that were written for the termination of his appointment in Hong Kong and they are dated 6th and 8th March 1946. One was the confidential report that Dad would not see and a short one that was given to the seaman to take to his next posting.

The first, and confidential report, is written by Lieutenant Commander Wilfred John Parker. At this time he had been with Rear Admiral Harcourt as his Signal Officer and went ashore when Harcourt became the military Governor of Hong to ‘free prisoners, keep law and order, re-open hospitals and organise children's parties, dances and cricket matches’, as one of his obituaries puts it. Parker must have been a bit of a ‘go getter’ as he was aboard HMS Edinburgh when she was torpedoed carrying Russian gold to the UK from Murmansk. They fought bravely to return to Murmansk but were torpedoed a second time and the ship sank. After a couple of weeks waiting in port he was posted to HMS Trinidad. They sailed for the UK and straight away suffered a severe air attack. Fires were started by near misses and the strong wind fanned the flames so much that the ship was abandoned and later sunk by their own ships. Latter in the war he was mined on HMS Sheffield and torpedoed on HMS Newfoundland, each time managing to return to port for repairs. He had served with Admiral Cunningham and helped to organise the landings on Sicily and now was the personal assistant to Harcourt in Hong Kong.

Dads report states ‘ Has worked well both on A.C. 11’s staff and on the staff of the Commander in Chief, Hong Kong, particularly in the latter appointment, where he was working much more on his own. Has plenty of initiative which at times was misdirected, but which was normally used with common sense. He has a lazy manner and appearance, which is against him and which he should correct. Of good physique and health’. I wish I had seen this when he was at us when we were a lot younger! I sense that there must have been at least one incident that caused some of these comments, and would love to know what they were. The report is counter signed by Vice Admiral Cecil Harcourt, Commander in Chief, Hong Kong. Wilfred Parker went on to be a Vice Admiral in 1967 and Knighted in 1969 on his retirement.

The other short report, seen by Dad, states the Dad ‘had conducted himself to my entire satisfaction. A good officer who has worked hard and well’. This one has been signed by Air Commodore Brian V. Reynolds who was actually appointed the Chief of Staff to the Commander in Chief, Hong Kong
10-Oct-45. We was promoted to Air Commodore on the job, 1-Jan-46. Reynolds went on to be Knighted on 1-Jan-55 and promoted to Air Marshall 1-Jan-56. Maybe the report was better as Dad had to see it (it was in Granny P’s records) or maybe as Reynolds had less direct contact with Dad than the Signals Officer Parker.

The mystery is what did Dad do between the end of this appointment in March 1946 and my idea that he got home via the Duke of York in June? Mum seems to think that Dad had been to Singapore for a while but there is no evidence of this so far. Did he commence his journey home some other way? Actually the Duke of York called at Singapore so he could have completed his repatriation on her anyway. For the purposes of the story I will believe that he did sail on the Duke of York as there is no way I will be able to track his route any other way.

Admiral Fraser, The Commander in Chief of the British Pacific Fleet (just in case you had lost track of all the Admirals) hoisted his flag on the Duke of York again and they sailed for Singapore. I believe that Dad was onboard too. They arrived in Singapore on 11th June. Here Admiral Fraser was relieved of Command of the British Pacific Fleet by Admiral Sir Dennis Boyd.

This is the only time I can find that Dad was in Singapore and I expect that he was there a few days. Mum says that he saw POW’s from Changi camp and was there at the relief of the prison. I suspect that there has been confusion of the story somewhere down the line as he could well have been at the opening up of the Hong Kong prison camps as the inmates stayed where they were until the Navy arrived. When Dad was in Singapore on the Duke of York it was ten months after the surrender. There could have been some severe cases that had been recuperating before transport home that joined the vessel, but I somehow doubt it. The story must have been regarding Hong Kong.

Admiral Fraser remained aboard Duke of York when they sailed for Colombo. They then passed through the Suez Canal and left Port Said 28th June and stopped off in Malta and Gibraltar. They left Gib. On 8th July and arrived in Plymouth 11th July. Dad has in the Portsmouth Division so if my guess is correct he would have travelled to Portsmouth the following day as he received Order For Release From Naval Service (Class A) (Officers) on 12-July-1946. It states that he has been granted leave, none for foreign service leave as this had been completed, (so that accounts for some of the missing time between March and June), 56 days resettlement leave (that everybody had) and 9 days for special overseas service leave. Dad would be free to take civilian employment at any time, may wear civilian clothes but keep his uniform intact in case of recall and that following his release he would remain in the reserve.
Posted by NB Holderness at 11:57