HMS Tamar had been an iron screw troop ship built in 1863. She had visited Hong Kong a couple of times with reliefs and stores for the garrison in 1878 and 1886. On her last trip she arrived on 11th April 1897 and was made the base vessel. She remained afloat in Hong Kong until December 1941 when she was scuttled before the Japanese took over the City on Christmas Day 1941. She was finally raised in December 1947 and scrapped.

After the Japanese surrendered a River Class Frigate was temporarily made base ship for Hong Kong  March 6th 1946 until 20th November 1946 when it was condemned. It had its name changed from HMS Aire to HMS Tamar. It was lost on Bombay Shoal in the South China Sea as it was been taken to scrap. 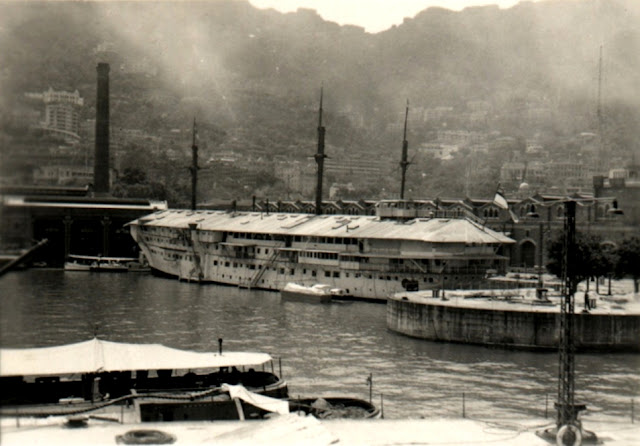 By this time things were getting back to normal and the Army no longer required Wellington Barracks in Hong Kong and they were taken over by the Royal Navy and became the ‘new’ HMS Tamar. Wellington Barracks were built in the 1850’s on the site of an old military hospital that was destroyed in 1841. 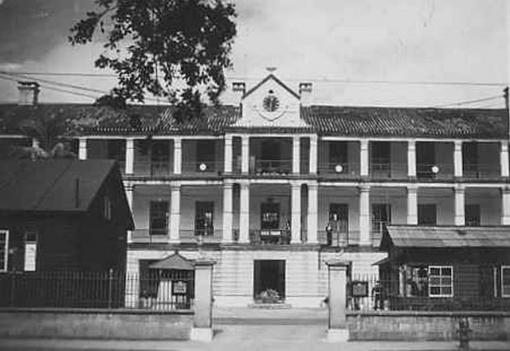 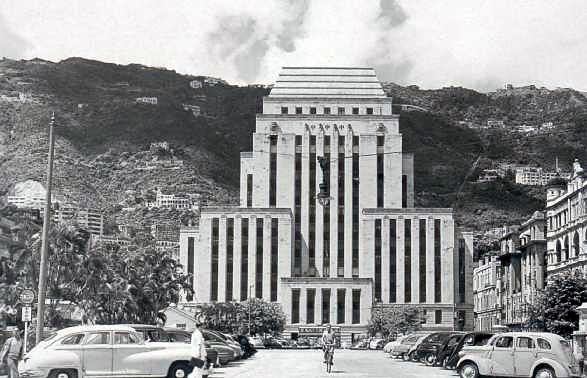 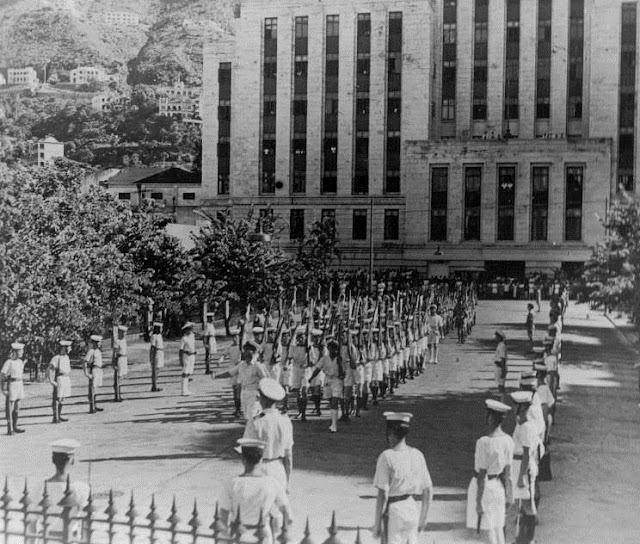 Armed guard from HMS Indomitable on 15th September for the official surrender. The photograph states that this is Governement House but is in fact the HSBC Building.

The Hong Kong and Shanghai Bank was where Admiral Harcourt had his Military Administration Headquarters. This was soon amalgamated with the Civilian Administration. The Administration of Hong Kong was under Military Rule but in fact Admiral Harcourt trusted the civilian administration that was quickly put in place and mainly left them to get on with it. On 7th September David McDougal was appointed the Chief of Civilian Affairs. He quickly got on with the job and electricity was restored to Urban areas on 10th September. From September to December the colony only had about 10 days supply of food at any one time. These problems were exacerbated by the fact that the population swelled from 600,000 (reduced due to the forced repatriation of Chinese to the mainland to make administration and feeding Hong Kong easier for the Japanese) to 1,000,000 in December. At first the Territories were mainly policed by the Japanese. As these troops were repatriated locals were used to assist the armed forces personnel. These also included some Guerrilla groups that had been formed against the Japanese Occupation. As they were well armed negotiations with them took a long time when they were no longer required to assist, and in many cases large amounts of money were paid to disarm them and bring stability to the area. It took time for the Hong Kong Police Force took to reorganise and train up as many of the expatriate officers had been interred during the occupation and were suffering ill health. Many of the Chinese officers had fled to China and returned in drips and drabs. It was only with the appointment of Duncan Macintosh in 1946 that the real job of recreating a very efficient police force and civilian administration was started.
Posted by NB Holderness at 08:53