The End is nigh. 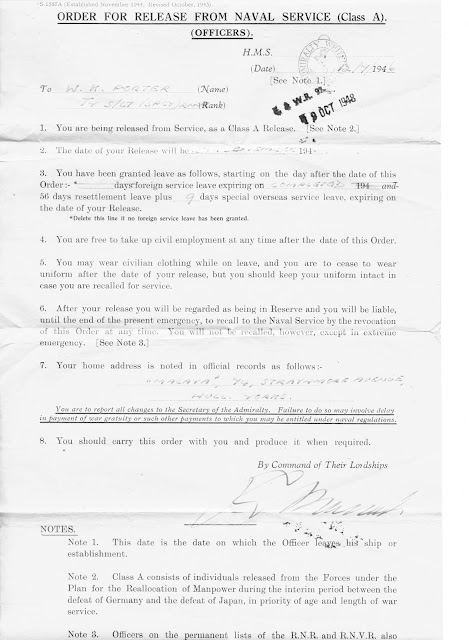 At the end of the war there were 5 million in uniform so it can be recognised that the ‘system’ may not have been running as smoothly as it should on paper. As I understand it men and women went to a dispersal centre where their papers were issued, S1587A in Dad’s case. If my theory is correct Dad may well have gone to the dispersal centre at Hilsea which was the centre for Portsmouth. Here all the checks were made on time served etc. They were given a medical and picked up their ‘demob’ clothes. They apparently had a choice of a double breasted pin stripe suit, single breasted jacket with flannel trousers or a three piece suit. To go with this they could have a felt trilby or flat cap, a shirt with two collars, a tie, a pair of shoes, two pairs of socks and a rain coat. Dad took a blue pin stripe suit and in fact got married in it.

Mum tells me that after 12th July Dad’s Mum and Dad were going on holiday somewhere and asked if Dad could go and work at Uncle Cyril and Aunty May’s farm in Preston for the harvest. I assume that this is the time that Mum and Dad got together. Mum was telling me their first date was a trip to Aldborough on Dad’s motorbike. They couldn’t go on the beach as it was still mined and strewn with barbed wire. The bike had a puncture in the rear tyre and Dad said that as he wasn’t pushing it all the way back they rode home on the rim. Mum said her bum ached for ages afterwards. Mum also says that Dad didn’t return to Hollis’s as he felt it was a dead end job and he was just the office boy there. I suppose after being away at war he wanted something better than before.

After the harvest he was asked to join his Uncle down near London in a market gardening enterprise. It seemed that his Uncle and another partner would take him on a for a trial period with a view to making him a partner too. They had bought an ex-army lorry and Dad’s job was to deliver the produce to Spittlefields Market. This meant Dad often working through the night and often sleeping on a camp bed in the market or in the lorry. He didn’t stick it very long and by Christmas was back home. Mum says he was then out of work until around the June 1947. He was too proud to sign on for unemployment benefit and had several ideas of things to do. One was to join the Police Force, another was to make things out of Bakerlite. Things might have been very different! Mum got a job with Fenners and Dad decided that he would try there too. He was taken on and went over to the West Riding to work up from the bottom in the pulley department, and the rest is history.

This wasn’t actually the complete end to Dad’s Naval career as we was still in the reserve and there is a letter dated 8th September 1947 confirming his enrollment as Temporary Sub Lieutenant (SP). The Korean War started on 25th June 1950 and in his records is a note that Dad attended a five day course at HMS Eaglet in Liverpool 15th January 1951.

Dad even got a promotion as he was given the rank of Acting Lieutenant (Sp) in the permanent RNVR on 30th October 1953. The records seem to also show that Dad attended HMS Galatea for cypher duties 12th April to 22nd April 1954. HMS Galatea at this time was the RNVR Base in Hull that was situated on Earles Road, off Hedon Road, which leads down to the area between Alexandra Dock and Victoria Dock. Mind you, at this time Dad and Mum (and David and Robert) were living in Nottingham. However it seems that Dad’s promotion was rescinded and he returned to Sub Lieutenant and left the permanent reserve and back to the Supplementary Reserve on 17th June 1954. I wonder if that was the general run down of the forces after the Korean War ended in July 1953 or Dad was stripped for other reasons, or simply resigned from the RNVR. I haven’t seen anything with regard to this yet. 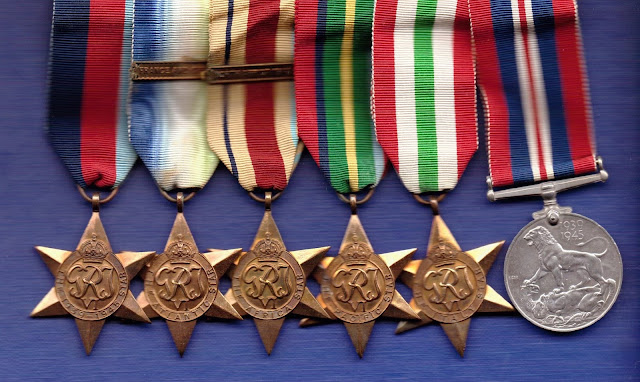 The 1939-45 Star was awarded for 6 months Service and at least on voyage through an operational area.

The Pacific Star was awarded for any service in the theatre between 2-Dec-41 and 2-Sep-45.

The Italy Star would have been awarded to dad for the Sicily Landings.

The War Medal 1939-45 was given for at least 28 days service during the war. It is sometimes called the Victory medal.

Therefore if you include the France and Germany Star that Dad had as a clasp on his Atlantic Star medal he earned six campaign medals. He certainly got around a bit. The medals sold individually would be worth less than £100. If they were sold together with some corroboration they would get more, but I hope they stay in the family for a long time.

This biography has taken quite a long time to accomplish, mainly due to being easily side tracked when spotting some tit bit of information about other matters. (Such as experiments were made to construct vessels made of ice in the Great Lakes to load with equipment and bring to the UK on a once only use. Apparently the experiments to construct the vessel were successful but all in all were too expensive!). I have tried to stay faithful to the records and give a true account of what he did and what he saw. This was much easier when he was a rating as he went from ship to ship. As an officer it is much more difficult to track him and I have had to make some suppositions as to where he went and what he did. I hope I have made these clear throughout the text.

It shows that from February 1941 to July 1946 Dad was at or near the centre of many of the momentous occasions of the war. It can be entirely understood why he and many of his fellow participants didn’t talk about those years in later life. It is also quite surprising that there wasn’t many more cases of mental problems in the following years. Mum does say that for many years afterwards Dad had nightmares about his friend being decapitated next to him on a ship. I only wish that I had thought to ask him about those days in the later years when he may have been more willing to tell me about it and I could have added more anecdotes and been more certain of the chronology of events.

I hope you have found it interesting and if you have any questions or suggestions please let me know.
Posted by NB Holderness at 12:07