The Relief of Hong Kong.

Rear Admiral Harcourt transferred from HMS Vengence to HMS Swiftsure. The fleet anchored in the Bay but the Royal Canadian Navy Prince Robert, after carefully scanning the Kowloon jetties, went alongside Holt’s Wharf, the only vessel to do so. They were to provide a shore party to bring order to the process of taking over the administration of the Colony.

Prior to the event there had been much political debate about what would happen in the event of surrender, that was becoming inevitable, about the role of the British Government in Hong Kong and who should accept the surrender. At this stage the leader of the Chinese Nationalist Party KMT or Kuomintang was Chiang Kei Shek. He was trying to exert authority over but within a few years the resumption of the Chinese Civil War was to drive him to . In the end it was the British Admiral (later Sir) Cecil Harcourt who took the surrender on behalf of Britain and the Commonwealth and the Chinese on board HMS Anson. On 1st September was declared a Military Administration and Admiral Harcourt was the Governor.

When the fleet arrived the Japanese were still free and were trying to keep order. There had been much looting despite the Japanese efforts. The shore party from HMCS Prince Robert were among the first ashore and immediately came across a troop of Japanese soldiers emptying a godown (warehouse) in to a small coaster. The Canadians only had 6 bullets each and they had no idea what the situation was ashore. There was a face off resulting in the Japanese laying down their weapons and going to leave the jetty in some vehicles. It was made clear to them that they could not take the vehicles and so they left with out them. There was no plan of what to do with them so they could not be taken in custody at that stage.
It was to be a week or so before all the Japanese had been rounded up, and longer out in the New Territories. A pilot from carrier HMS Vengeance recalls that once in custody some of them were still committing ritual suicide rather than admit defeat. All Japanese gear had to be searched several times to find weapons and despite this some found inventive ways of ending their lives. The only people available for policing the Colony were the Marines and men from the naval ships and a team of RAF airfield repair guys who had been on the way to Okinawa to build an airfield for the British to bomb from.

There are other reports from this time that there were regular sounds of shooting etc. I have found no reports of Japanese resistance but it could have been trying to prevent looting. It seems that the locals did a great job of clearing out unoccupied premises stripping every wooden item and taking the wiring too. Very slowly over the first few days more food became available and life started to get back to normal in Hong Kong. There was a curfew at 2100 every evening. This was extended to 2200 on 7th September. The curfew was dropped altogether on 16th September. 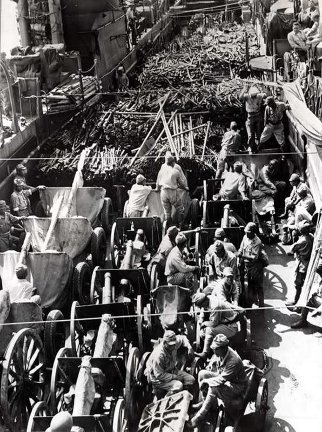 Collecting Japanese weapons after the surrender. Japanese troops were used for this task as there were very few Allied troops available.

On 14th September Admiral Sir Bruce Fraser arrived. He was the CinC of the British Pacific Fleet and he had his flag aboard the Battleship HMS Duke of York. Admiral Harcourt had been the Commander of this vessel earlier in the war. On 16th September the official surrender of the Japanese in took place at Government House. Admiral Harcourt as the CinC and Military Governor of signed the document and Admiral Fraser as CinC BPF was an observer. Admiral Harcourt accepted two samurai swords at the surrender, one from Vice Admiral Fujita Ruitaro and one from Major General Okada Umekichi.

Dad remains on the Indomitable until 30th September. This would fit in with the fact that it would have taken them about a month to set up headquarters communications etc that were on a par with the ship. Great strides were made with the civil administration with the trams and ferries running and a new currency reintroduced by 14th September. The Yen was compulsory during the Japanese occupation. The new currency was cleverly introduced by partly paying the 40000 Chinese who had been taken on to clean up the city with it and also with goods and food. Dad is down as on the staff of A.C. II which I think is Aircraft Carrier 11th Group. Up until this time Dad had been on the staff of Admiral Sir Cecil Harcourt as Flag Officer Commanding the 11th Aircraft Squadron which included the carriers Colossus, Venerable, Vengeance and Glory. After this he was employed on the Staff of the Commander in Chief Hong Kong, which was still Admiral Sir Cecil Harcourt but now ashore as the Military Ruler and Governor of Hong Kong.
Posted by NB Holderness at 06:58