The Landings on were called Operation Infatuate. The landings at were Infatuate I and at Westkapelle Infatuate II. The Operation was scheduled for 1st November 1944. The first landings were to be at . The 4th Royal Marine Commandos were to be the troops used. They consisted of the 4th Commando. They left Breskens on the east bank of the at 0440 just as the artillery bombardment of 300 guns started up from the Breskens pocket to subdue the landing site. At 0620 the first landing craft hit the beach to little opposition and moved in land. A second wave landed shortly afterwards. Although the landing was lightly opposed there was heavy fighting in the town with numerous snipers hidden in the gantries and cranes of the port and dock yard. The town was finally taken on 4th November.
Infatuate II was to have the jump off port of Ostend. The code for the Naval group was Force T with Commander Pugsley RN in command. Force T consisted of the bombardment craft of HMS Warsprite with monitors Erebus and Robert. The HQ vessel was HMS Kingsmill (K484), a Captain Class escort destroyer. She had her keel laid in , on 9th July 1943. She was launched and fitted out on 13th August 1943, a very speedy 35 days. She was commissioned into the Royal Navy on 29th October ’43. She was 289’ long and 35’ beam with a draft of 11’. Four General Motors engines driving two shafts moved the vessel at 19kts. She had a compliment of 156 men. Her armaments were 3 x 3” guns, 4 x 20mm AA guns, and 4 depth charge projectors. She was scrapped 17-Feb-47 so only had a life of 3.3 years! 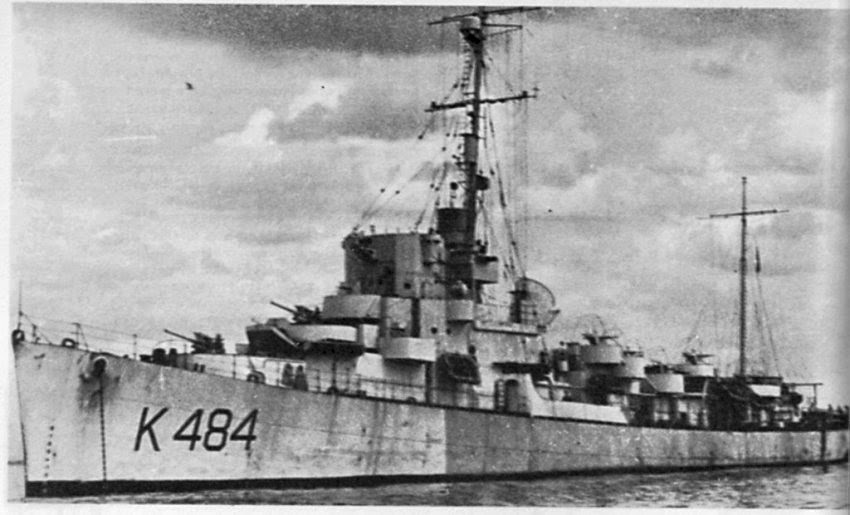 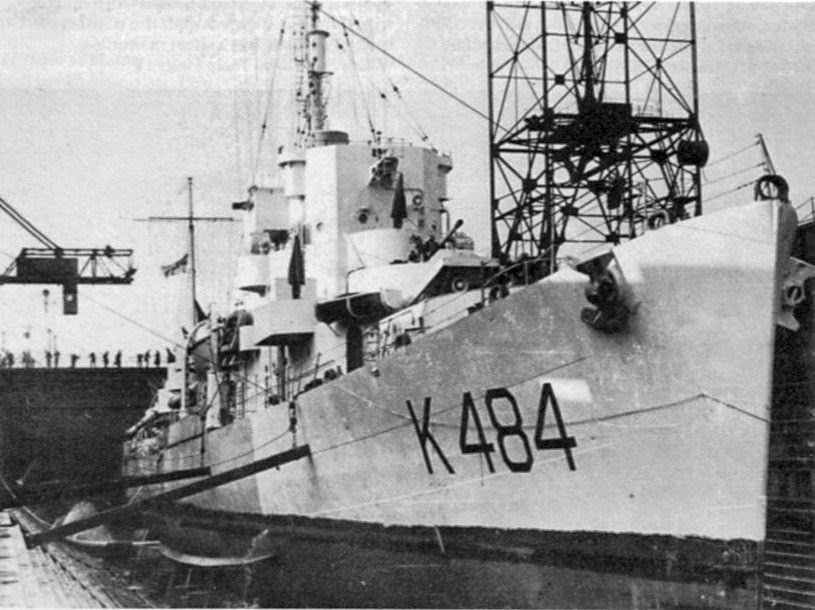 HMS Kingsmill in Portsmouth Dry Dock December 1944
Dad was probably aboard the Kingsmill as he was a staff Officer, and this was the Headquarters vessel, but it was Force T Headquarters ship. The rest of Force T consisted of 27 vessels of the SSEF which were commanded by Commander K.A. Sellar, and the transport craft used to land the Commandos. The Support Squadron Eastern Flank Headquarters vessel was LCT269 with Commander Sellar aboard. I have a photograph of Dad as a Staff Officer of Support Squadron Eastern Flank. To my mind that could mean that he would be with the C/O of that unit rather than Force T. In this case Dad would have been right in the thick of the action as we will see. However there is a report that after the battle the crew of LCT(H)269 was 18 men. I think the normal complement was about this number so it sounds as though extra hands, as in staff officers were not aboard. However Mum tells me that Dad suffered nightmares after the war as he had witnessed a crew mate next to him being hit in the head. Apparently it was somebody that he had done training with previously. He had come aboard with a Senior Officer for a quick up date of orders. Whilst waiting and chatting at the ship’s rail the other bloke was hit in the head and died. Mum says that dad volunteered to take his place and go back with the Senior Officer.  She felt sure that this had been at Walcheren. This could have been when Dad was on the Kingsmill and returned to one of the close support squadron landing craft, or maybe when he was on the LCH 269 and then went aboard one of the other landing craft. Mum thinks that it was a contemporary of Dad’s so looking in the lists of Temp. Act. Sub Lieutenants lost on 1st November there are none for Kingsmill or LCH 269 but there are plenty from other vessels. We will never know I suppose.
Force T assembled at Ostend and then left there approx 0030 1st November 1944. There were great worries that a big shore battery at Knokke on the coast would be a real problem to the fleet. It was supposed to have 4 x 11” guns which could have played havoc with the small vessels. In the end nothing happened. It was latter found that Canadian Forces over ran the fortifications a few hours before the landings. It was also found that the 11” guns had never been fitted. It was a lucky escape for the flotilla. During the night there was a scare when LCH 269 picked targets moving at speed on her radar. They could only be E Boats and Actions Stations were called. They could have caused severe casualties if they had got amongst the fleet. As it was a British destroyer had also seen them and her larger guns drove them off and caused some damage to the Germans. The Commander of the Destroyer just happened to be the old commander of LCH 269 who had been replaced by Commander Sellar! Another lucky escape! 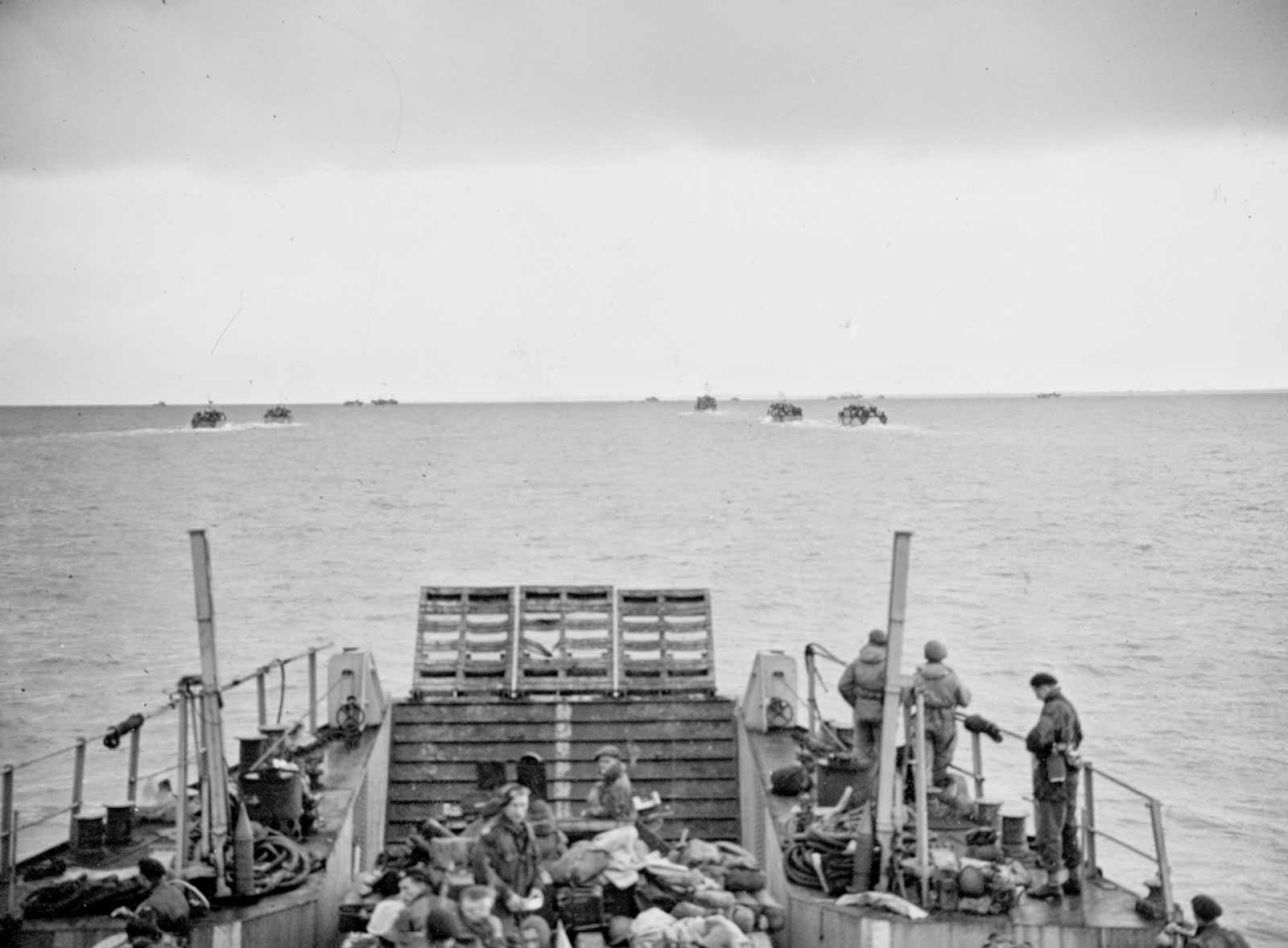 Convoy to Walcheren morning of 1st November 1944.
Onboard the Kingsmill with Commander Pugsley was Brigadier B.W. Leicester who was the Commander of the 4th Royal Marine Special Service Brigade, which consisted of Nos 41, 47 and 48 Commandos. These two had to make the final decision as to whether the landing should take place. It was known that the aerial bombing would not take place as the French and Belgium airfields were shut due to low cloud (although Walcheren was clear) and the damage already caused to the fortifications was unknown. The War Office, despite knowing how desperately important the lifting of the blockade of the Scheldt  was, had given the last word to the field commanders. Their orders stated that they should not attack if it was felt that the German defences were ‘ more than very weak’. The sea state was calm, which may not occur again for along time at that time of the year, and with the possibility that the low cloud would lift and air support would be available later, and being fully aware of the urgency of getting supplies to the front lines, they gave the code for the commencement which was ‘Nelson’. They must have had great anguish knowing that the odds against the SSEF escaping with light casualties were small.
One of the German fortifications on .
The shore guns opened fire on the motor launch that was marking the anchorage spot for the Kingsmill at 0809. This was about 5 miles west from the beaches and was also where the hospital craft would wait. At 0820 the Warspite and the Roberts opened fire as they were easily in range. The Erebus had developed a problem with her turret so was unable to join in until later. As the Warspite had had one of her turrets put out of action when damaged in the there were salvos of 10 15” shells going over. Afterwards it was found that due to the lack of air spotting due to the weather the accuracy wasn’t very good compared to later in the day when trained spotter planes were able to direct the guns. It was found later that the naval bombardment had knocked out two of the guns, at W15 (location on the map above).
The SSEF were to go closer to the beach and protect the convoy of landing craft that were to land the Marines. The plan was for 47 and 48 Royal Marine Commandos to land to the north of the gap and the 41st RM Commando with the 10th International Allies Commando consisting of Norwegian and troops, to land south of the breach. The first few troops ashore would land directly from LC(I)’s, landing craft Infantry, and those following would go ashore in tracked vehicles called Buffaloes and Weasels. There would also be some tanks, all landing from LC(T)’s., landing craft Tank. 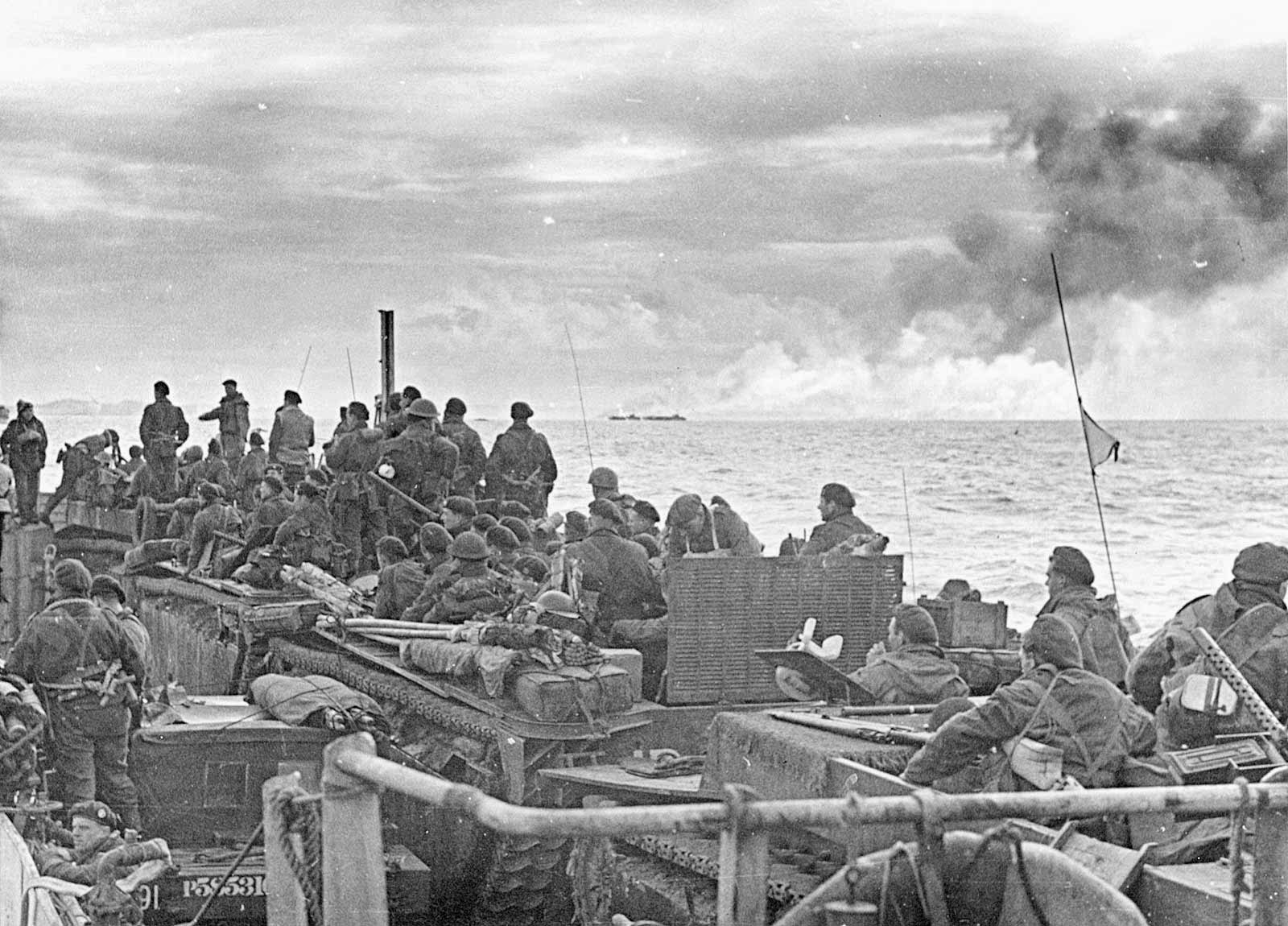 Part of 47 Commando Royal Marines on LCT4 that was hit on the beach later. The large tracked vehicles on the right are Buffaloes and the smaller one on the right a weasel.
On the run in to the beach the artillery from the Breskens side of the river was to lay down a barrage and just as the first craft were approaching. The SSEF were to close the beach and offer support for the actual landings. At 4000 yards out the vessels of the SSEF were taking heavy hits. One of the rockets ships was hit and there was a premature detonation of the missiles. It is variously reported that they caused destruction on their own forces but from other reports it sounds as though there were several very close calls and a very real scare to many of the other landing craft. Even before the first landing craft had beached some of the SSEF vessels had been rendered useless. As they closed the beach they could see that their guns were just bouncing off the concrete embrasures. Commander ‘Monkey’ Sellars ordered them to get even closer to the shore to fire directly into the slits. It had been noticed on previous landings that the German guns were very likely to concentrate their fire on the vessels that were actually attacking them, rather than the ships carrying the men or material that was to be landed. Thus drawing the German fire they allowed the troop carrying craft to close the beach with few casualties. They also found that they were so close that many of the guns could not depress low enough to fire at them. However the 88mm guns were deadly.  Just as the first troops were about to land 12 rocket firing Typhoon fighters from No.183 Squadron that had managed to get air borne despite the low cloud and arrived to add their weight to the safety of the landings by picking targets close to the beach.
A team of war correspondents went with the troops so recording some remarkable photographs and film of the Support Squadron’s actions and battle.
Movietone film of the Battle  http://www.youtube.com/watch?v=doq8s68Xoo8
Norwegian movie newsreel    http://www.youtube.com/watch?v=xIber1VFkn4
Dutch Newsreel showing flooding and repair of dykes http://www.youtube.com/watch?v=Fg7zGo9Wy08
Posted by NB Holderness at 10:32