HMS Beaconsfield is the RN shore establishment in Port Melbourne, Australia. Dad had been sent to fight the Pacific war!! His papers say that his is ‘addl for displ. by VA.(Q) BPF’ I understand this to mean that he was on the books of HMS Beaconsfield for dispersal by the Vice Admiral (Q) that was the designation for Vice Admiral J.W. Rivett-Carnac who was responsible for the enter logistical support of the British Pacific Fleet ashore and afloat. He was based in and I think this is just an order to get Dad to the Pacific Fleet and once there it would be decided where he was to end up.

Percy Porter had written in the photograph album of Dad’s war time exploits that he had sailed on the RMS Mauretania. I found this very difficult to confirm as in July 1945 the European war was over and a fast ship such as Mauretania would be sailing independently and so not in convoy records. I finally discovered a memoir of a Naval Petty Officer sailing on her. I had a date and could therefore track her down more easily. Dad must have still been on the with the Support Squadron and I can’t find anything to show that he had leave. His posting was starting on 1st July and the Mauretania sailed from on 3rd July. 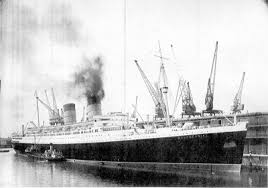 RMS Mauretania in early 1939.
RMS Mauretania was launched 28th July 1938 at Cammell Laird’s Birkenhead for the Cunard White Star Line and was the first ship of the amalgamated company. She was completed in May 1939. She was 35674 gross tons and 19654 net tons, length 739ft (235m) and beam 89ft (27m). She had 2 sets of Parson’s steam turbines, 42000 shaft horse power, driving two propellers and a service speed of 23kts (max. 26kts).She was designed for 1360 passengers and 810 crew.
She only managed three round trips to before the War intervened. She was painted grey and fitted with 2 x 3” and 1 x 6” guns and then sailed to to be out of harms way. She was laid up there with the liners Queen Elizabeth, Queen Mary and the French Normandie. She was there for three months when she started her trooping working. In April she was in Sydney NSW and had further alterations carried out to increase the capacity of her passenger numbers and make better protective armaments with 2 x 6”, 3 x 12lb guns, 3 x 40mm and 22 x 20mm Anti Aircraft guns along with 2 rocket launchers. Throughout the war she traveled over 540,000 miles and carried over 340,000 troops. In one round the world trip she covered 28622 miles in 82 days. 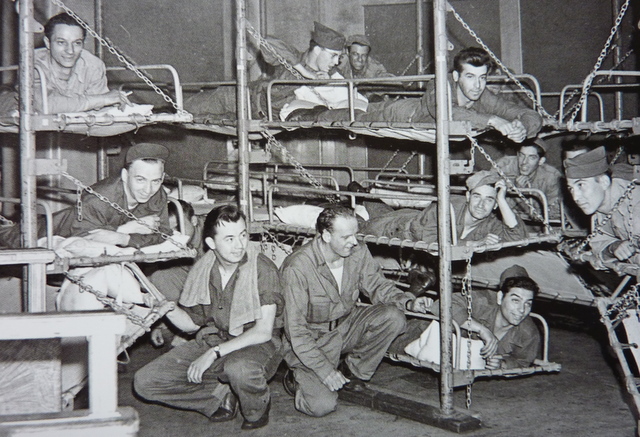 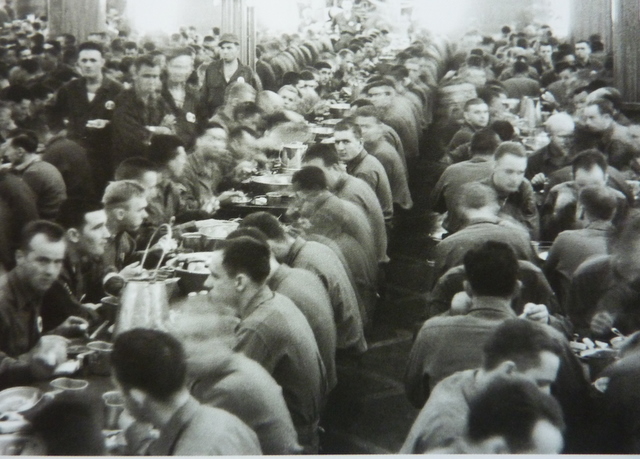 Officers dining RMS Mauretania
On 3rd July 1945 they did sail independently as she had done for much of the war as vessel over 14.5kts were thought fast enough to be able to avoid danger. Now we know that the Allies were able to read German Naval signals it seems that they would be fairly certain that they would be able to give fast important ships sufficient warning for their speed to move them clear of danger. The memoir I found was from a Kenneth Tratthen, a RN Petty Officer Engine Room Artificer who was going out to join the BPF. The majority of the passengers were Australian and New Zealand released from German POW camps and troops. There were also a small number of wives and children, mainly of New Zealand RAF blokes.
The first stop was the Panama Canal, and they passed through Cristobal on 12th July, and then headed to for provisions. To get to their berth they had to pass very close to the sunken battleship Oklahoma with a thousand bodies still in her following being sunk by the Japanese. They arrived on 25th July. After taking stores etc they left on 27th July, however 186 people missed the ship. When they arrived in they were all there waiting for them as the Americans had flown them over. I wonder what the repercussions were though.
They arrived in on 4th August at 0900 to be met by a rapturous civic reception with military band and all the waiting loved ones. There were a few tears shed though for those that would not return. They left on 7th August and headed for . They had to anchor outside the harbour briefly on arrival on the 8th August to allow the boom to be opened. A launch came out with the CinC of Australian Army aboard. He tried to make a speech by loud speaker whilst alongside but was drowned out by the boos. He had a military band with him and they also soon gave up playing as they were pelted by hundreds of coins thrown by the troops! When they finally passed through the Harbour every horn and whistle was sounding. Once fast alongside the disembarking troops were bussed to the cricket ground where radio announcements had been directing all the locals to go as well. The soldiers greeting was equally as rapturous as in . PO Tratthen also disembarked and was sent to HMS  Golden Hind. HMS Golden Hind was an accounting base and transit barracks in bell tents on Warwick Road Race Course. The Officers were housed in the Grand stand. Dad may well have been here for a short time as his accounting base was in . He is down as leaving the books for HMS Beaconsfield on 11th August 1945. The atom bomb Little Boy was dropped on Hiroshima on 6th August and Fat Man on Nagasaki on 9th August! Mum tells me that Dad recounted that he spent the passage playing one type of cards in the morning and another in the afternoon, each time with a stilton cheese in the middle of the table that they just helped themselves to. 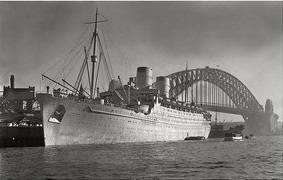