In the end the losses and damage were;
Sunk or sinking:-                         LCG(L) 1 & 2, LCF 37, LCG(M) 101 & 102.                                                                            On fire and abandoned:-              LCF 38.
Damaged and out of action:-       LCG(L) 11 & 17, LCT(R) 334 & 363, LCM 42 & 36, LCS(L) 260
Damaged but continuing:-           LCG(L) 10, LCF 35 & 32, LCH 98.
The five hour battle saw 172 killed and 236 wounded out of the little force. That their sacrifice was not in vain was very evident as Operation Calendar got underway on 3rd November, even before the island was fully taken. This was the sweeping of the for mines. In the end 269 mines were removed and the navigation was declared open 25th November. The first large ship to discharge in was the ‘ ’, and soon the port was discharging 22000 tons of cargo a day which speeded the run to the Rhine and ultimate victory in .
There were plenty of Honours handed out too. Commander Pugsley was awarded an OBE. Commander K. Sellars was awarded a DSO. Two Royal Marine and twenty two Royal Navy Officers were awarded the DSC and twenty seven RM and RN NCO’s were awarded DSM’s.
After the withdrawal at 1230 the majority of the SSEF withdrew to . HMS Kingsmill and LCH 269 remained anchored 5 miles off the beach. Apparently the vessels that were anchored received intelligence that they would be attacked by mini submarines and frogmen so the order was given to drop explosives over the side every three minutes. This could have been the incident that I remember Dad talking about, rather than off the Normandy Beaches, until around 1345 when they too left the field. The Warspite, Robert and Erebus withdrew for the night but were able to offer further support the following day before leaving the area. It was to be Warspite’s last action. She had fired 350 rounds of 15” shells between 0800 and 1800 on the 1st November, which is said by some to be the highest number fired of any vessel. LCH 269 and a hospital craft were thought seaworthy enough to continue to Poole. However the weather blew up and as the landing craft were flat bottomed and high sided they made a lot off leeway. LCH 269 could also only steam at slow speed due to the hole in her bow. Unfortunately the two vessels ended up in the English defensive mine field and they didn’t have charts. The hospital vessel was struck amidships by a mine, lifted bodily out of the water amidships and came down in two pieces and sank in seconds. There were no survivors.
The LCH 269 was the only vessel to return to Poole unscathed. It was very sad to see all the beds that would not be filled again. They were also very upset as some of their personal possessions had been stolen. The vessels of the SSEF were repaired over the next day before wending there way back to Poole. One of the landing craft had 47 plugs in the hull to keep the water out.
Once the survivors had returned to and carried out full repairs and maintenance and prepared the vessels for the next task they were on stand by. Dad remained with the SSEF until 30th June 1945 but the small ships were not called to fight again. Dad must have been billeted ashore around Poole or but I have no way of knowing where. Earlier in 1945 the small fleet were told to prepare their craft for the as the tide of conflict moved to the Pacific. They were never to go there though In June and July the fleet of vessel were moved round to Appledore where they were laid up for the long term and the remaining crews dispersed.
The only vessel to return to unscathed was LCH 269 and the 16 crew in the next few days decided to raise a fund for a memorial for their fallen friends. Commander Sellars also chipped in a large amount. A wooden plaque was erected outside St Michaels Church, Hamworthy, as the closest to their base, until such time as material and money were available. The plan was to build a lych-gate to the churchyard. It was not until early 1952 that the Admiralty contacted the church and Commander Sellars visited with plans. There was a scheme to enlarge the churchyard so the lych-gate would be incorporated in this. The fund was still too small so the church agreed to fund the base, brick pillars and curved wall whilst the Navy and Marines would find the oak for the woodwork and pay for the two memorial stones that were to be carved by local craftsmen. It was on 5th July that the Bishop of Salisbury blessed the new churchyard and gate and the Royal Marine Band marched up the road. Admiral Philip Vian and Commander Sellars were among the speech makers and then over 200 enjoyed tea on the Rectory lawn. As far as I know it should still be there. 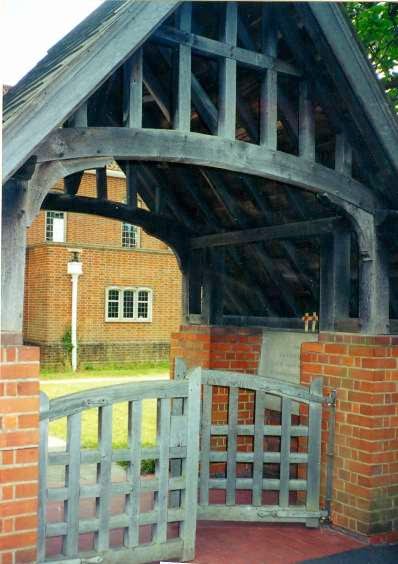 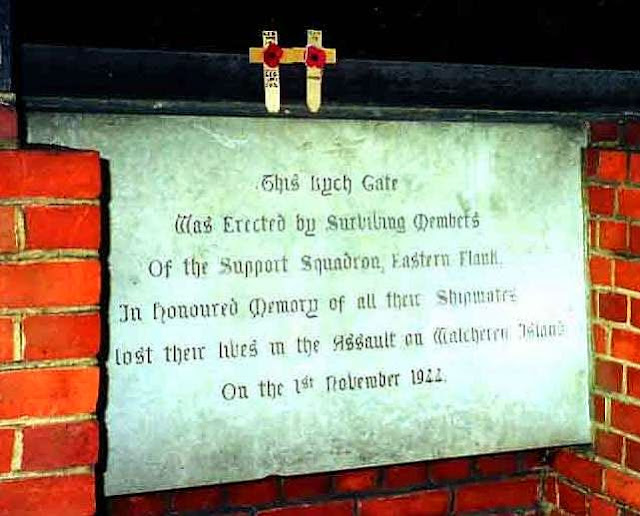 Memorial Plaque sited 5th July 1952
There are two S206 personal report forms from his time in the SSEF. The first is dated 30th April 1945 and so several months after the action at . It is for recommendation for accelerated promotion  (Admiralty Fleet Order 4067/44). It states his position as Cypher and C.B. Officer. (I think that CB is Confidential Books and were the codes of the day, orders and secret maps etc that were for restricted viewing and were supposed to be kept in a weighted pouch when not in use. It would have been Dad’s duty in a sinking or capture to ensure that the pouch got thrown overboard to prevent them falling in to the hands of the enemy). His general conduct is given as satisfactory (the only other choice is unsatisfactory!). His habit is given as temperate.
Professional Ability 7, Personal Qualities 6, Leadership 6, Intellectual Ability 6, Administrative Ability 7. The general opinion of the Officer is ‘This young Officer has served for a considerable period (as a rating) on various Admiral’s staffs and has knowledge of procedure and customs of the service are wider than is usually found in the Special Cypher Officers. His usefulness in the Squadron has been manifest in many ways, and his willingness and ability to undertake duties not normally expected of his branch, has been marked. He has good organising ability and, as a cypherer, is in the first grade’.
He is recommended for immediate promotion to Special Cypher, and it is signed by his reporting officer Commander L.C.A. Leefe, RN, on 13th May 1945. Commander Leefe was the Deputy Senior Commander of the Support Squadron, Eastern Flank. His Senior Officer, Captain A.F. Pugsley, RN writes Forwarded, concurring and signed 30th April 1945. Unless Captain Pugsley has made a mistake it seems that he has originated the report as he dated his part prior to the reporting Officer? This is a much better report than his previous one by a long way so Dad must have acquitted himself well during the Battle or at least during the reorganisation following.
There is then a little mystery as only two weeks later, on 22nd May there is almost the same report but this time his position is given as Squadron Cypher and CB Officer. It seems that he got a sort of promotion as he is now looking after the whole squadron. However this one is dated 22nd May by Commander Leefe and 30th May by Capt. Pugsley. There is a further mystery as the previous merits points have been crossed out and each lowered by one and added in by hand. He is still recommended for immediate promotion though. I wonder if they have reconsidered, or Dad has got bored after almost 6 months of doing not very much and got into trouble, or Commander Leefe liked him less than Capt. Pugsley. We will never know now. I have also found a very short report also written Commander Leefe which states Dad had conducted himself ‘to my entire satisfaction. A keen, zealous and hardworking Officer. Always cheerful and ready to undertake and duty asked of him’. I think this is a much better report as it was shown to the Officer to which it was about rather than the S206 form which was a confidential report and sent to the Admiralty.

Officers of the Support Squadron, Eastern Flank. Dad is at the far right on back row.

Inspection of Support Squadron, Eastern Flank by Vice Admiral Sir Harold Burrough at Poole in May 1945. Admiral Burrough was the Allied Naval Commander in Chief, Expeditionary Force until July 1945.
The above three photographs were taken by the Bournmouth Times. Some sources state that the lower photograph was taken prior to the Walcheren Raid. Somebody has written on the back of Dad’s photograph that it was taken in May 1945. The vessels in the background are, from left to right, LCT(Flax)36, LCT(Gun) 536 (very difficult to read but I have not been able to trace a number like this to the Battle of Walcheren), LCT(Headquarters)269, ( I thought Dad may have been on this vessel as it was the close-in HQ vessel with Commander Sellars aboard but on balance as Dad was the Squadron Cypher Officer he was probably on the Kingsmill). It is interesting to note though that he had an assistant, Sub. Lt Douglas.


It looks like the Support Squadron Eastern Flank was disbanded in  June 1945 as the Officers that I can trace all seemed to change postings at this time.