HMS Mercury was the fairly new signal school near Petersfield about 20’ north of . The signal school had originally been in dockyard. After the very heavy air raid on Portsmouth dockyard in March 1941 the decision was made to move out of the yard to more safe, and quieter area. Dad may well have been in the dock yard on the night of the raid as he was actually in doing his initial training when it occurred. He was posted to HMS Victory! They decided to move the school to Leydene House and the new school was to be called HMS Mercury as Mercury was the Roman messenger of the Gods. His Greek equivalent was Hermes.

The Leydene estate was owned by Lord and Lady Peel. William Wellesley was the grandson of the Robert Peel of founding the Police fame. Not Sting Police, the other one! His father had been Speaker of the House of Commons for ten years. The owner himself had been Secretary of State for twice and Lord Privy Seal. He was made an Earl in 1929.  He had married Eleanor (Ella) Williamson whose grandfather made a fortune in from importing material and inventing linoleum. Her father inherited and became Liberal MP for . He was made a Baron in 1895. He married three times and had two daughters. The other one, Maud, died in her thirties. Her father became reclusive and when he died he left half his £10 million fortune to his surviving daughter and the rest to his third wife. At Eleanor and William’s marriage he had already given them £800,000 to start them off. That would be about £9 million in today’s money! William and Ella bought the Leydene estate after an extensive search. The 10400 acre estate was bought from Lord Hotham in 1913. They had found the place where there was solitude as no other property could be seen from the house yet it was close to rail links to . The site was astride a prehistoric road and triple banked ditches (one of only two in the country) called Cross Dykes. They are still there. The House was designed for them by an architect called Jupp and was started in 1914. The First World War put paid to an early completion as all worked ceased. It was restarted in 1919 and was finally completed in 1925. However cost cutting that had taken place, no damp course and some single brick thickness walls, would cause problems in later life. The stone for the building came from and the bricks were specially made at Rowlands Castle Brick Works a few miles to the south. The notable features of the house were it’s staircase and the clock tower. The clock tower was demolished in 1971.

Once the house was completed Lord Peel preferred to spend most of his time in to attend to his politics. However Lady Peel stayed there and was known to be ‘careful’ and eccentric. She was known to hitch a lift on a coal truck rather than hire a taxi. She even tried to cover the extra cost of some of her guests being delayed leaving a house party as the council did not clear the roads of snow! Her eccentricity manifested itself in her exercising naked on her balcony every morning. If she saw anybody watching her they were sacked. When her husband died in 1937 she took to wearing black and never seemed to change as her clothes slowly turned green with mould. 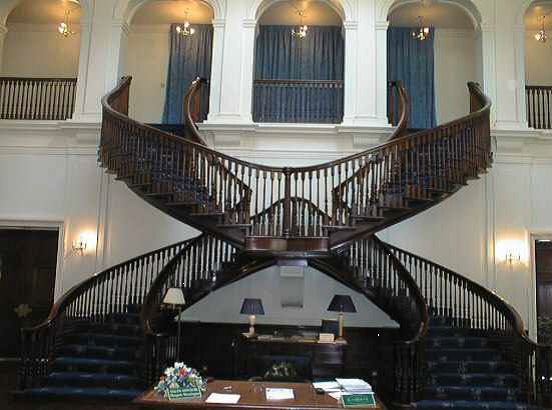 The Staircase at Leydene House

After Lord Peels death she bought an estate near Kelso so as to be close to the salmon fishing. She had a house like Leydene built there. She died in 1949 and is buried in All Saints churchyard in close to Leydene House. After the war the War Department thought that the cost of restoring the building would be greater than purchasing the place and it became the permanent signal school until 1993 when it was closed and its activites shared out elsewhere, mainly to HMS Collingwood south of .

The school opened on 16th April 1941 with 300 students living in bell tents. Before the winter several Nissan huts were erected for some and it was to be many years before the wooden ends, designed to save money and for speed of erection, were actually bricked up. By the end of the war numbers had been as high as 1200. The main house was initially used as the Officers mess and quarters, but later, as other buildings were put up, it became used as offices for the administration of the base. 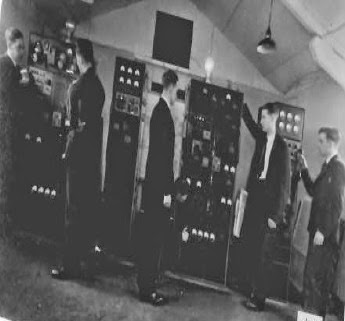 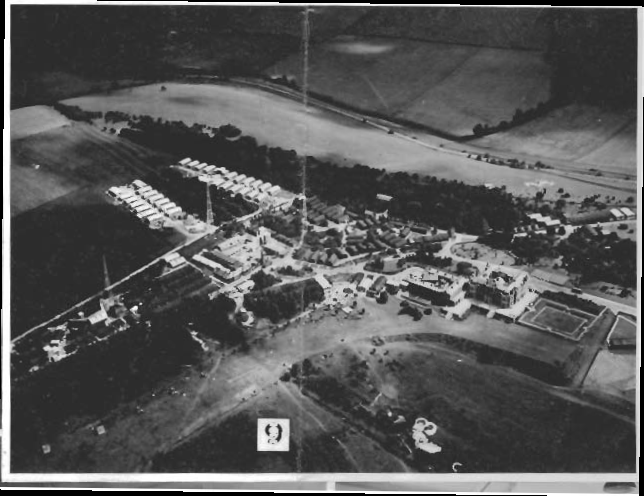 Dad was at HMS Mercury for just over three weeks and I can find no evidence that Mercury was also an Officer Training base. I rather suspect that he was being up dated on the fast moving world of signals and codes.
Posted by NB Holderness at 11:42