HMS Cabbala was another ‘stone frigate’ and during Dad’s time was situated at Tortworth Court, Wotton under Edge, midway between Gloucester and Bath. 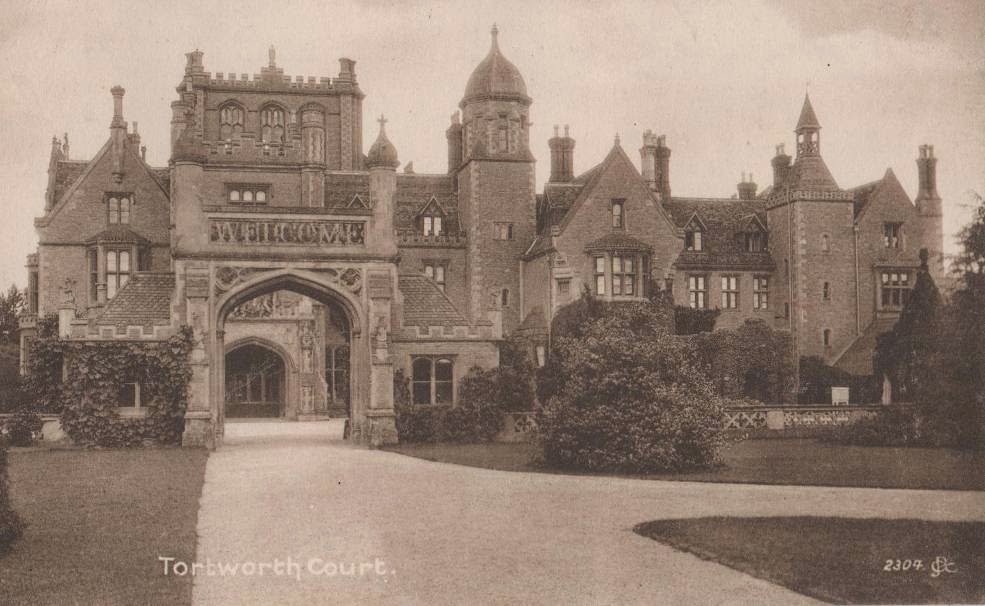 Tortworth Court before the War.

Tortworth Court had been the estate of the Ducie Family since 1620. The family seat was originally at Woodchester high in the Cotswolds. As the 2nd Earl suffered from rheumatism and arthritis he decided to build a new, more commodious house, at a lower elevation and less prone to fog and wind. Samuel Sanders Teulon was chosen as the architect and the house was completed between 1849 and 1853. It was equipped with all mod cons of the age, including gas lighting with its own gas works and hot air central heating the furnaces of which were supplied with coal by its own railway. The 3rd Earl further developed the property and added a still important arboretum in the grounds. The 3rd Earl died in 1921 and as his son had predeceased him the title passed to his brother who was farming in Australia. The 4th Earl died in 1924 and his son inherited. He was also farming in Australia but divided his time between there and Tortworth Court.
At the outbreak of the War the family was in Australia. He offered the house for use by the Australian Navy but the British Navy took it over as HMS Cabbala in 1941 for use as a code and signal school. As all shore establishments are considered to be ‘ships’ by the navy the morning and evening flag ceremony had to take place but as HMS Cabbala was semi secret the flag was erected in the central hall away from prying eyes. In 1942 HMS Cabbala was relocated to Warrington and the house taken over by American servicemen. A hospital was built in the grounds and there the American wounded from the North African campaigns and the D Day landings and advance into Germany were treated.

After the War the 6th Earl died and his son took over the running of the estate. It is still in the family and is very well and efficiently run. Tortworth Court was sold for conversion into luxury flats and houses but a fire in 1991 caused everything to stop. The building was left derelict until 1999 when it was bought and sensitively restored to a luxury hotel by Four Pillars Company.

Dad was there for about three and a half months for the training as a Coder. I haven’t got much information about what was involved but obviously they received signals and had to either decode or encode them for transmission or reading.

Prior to a posting to a vessel Dad was again listed as being attached to another accountancy ‘stone frigate’.
Posted by NB Holderness at 01:39