HMS Nelson had been built on the Tyne and commissioned in August 1927. He sister ship Rodney was commissioned in December the same year. These ships were very distinctive as they were the only vessels to carry 16” main armaments and all the main guns were carried in turrets forward. This came about due to the limitations imposed by the Washington Naval Treaty of 1922 that limited battleships to a tonnage of 35000t. To fit 16” guns compromises had to be made. The size of the engine and boiler rooms were reduced to lower the tonnage and so top speed was only 23.5kts. This then meant that the guns could all go forward and the accommodation aft to balance them. The main amour plating was also limited to vital areas.

In September 1941 Nelson had been escorting convoys to Malta when she was hit by an aerial torpedo from an Italian plane. Although damaged she eventually got back to Rosyth for repairs. When they were completed in May 1942 she assisted in the escort of convoy WS19P as far as the coast of Angola where she was turned back to Freetown, arriving on 1st July. As Dad joined Nelson on 11th July I assume that he joined as soon as the Canton arrived in port. 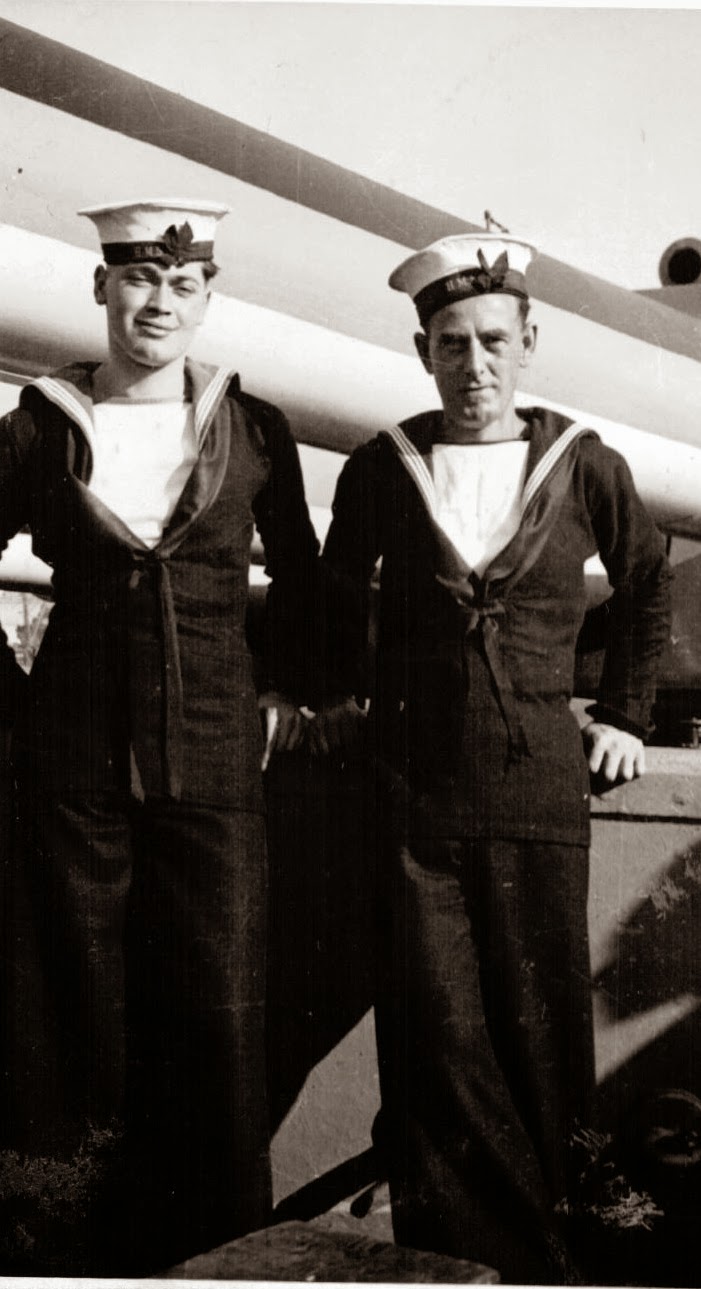 Dad on the left and unidentified shipmate aboard HMS Nelson.

17-Jul-42         Nelson sailed form Freetown in company with Rodney and destroyers Derwent, Pathfinder, Penn and Quintin.
26-Jul-42         Arrived in Scapa Flow and was nominated to join Force H in the Western Mediterranean.
27-Jul-42         Promoted Admiral Syfret hoists his flag and starts preparations for ‘Operation Pedestal’ to re-supply Malta. In the following week meetings were held and plans made. Maximum AA ammo was loaded.
2-Aug-42         At 1600 Nelson sailed from Scapa Flow with Rodney and a destroyer escort of Eskimo, Pathfinder, Quentin, Tartar and Somali.
3-Aug-42         The Nelson’s group joined up with convoy WS21S off Ireland. This was the name of Operation Pedestal ships to confuse the enemy.
9-Aug-42         At 2300 entered the Strait of Gibraltar. Nelson and Rodney, carriers Eagle, Indomitable and Victorious, cruisers Phoebe, Charybdis and Sirius were designated as Force Z. These capital ships could not be endangered in the narrow and shallow seas of the Skerki Bank (called Bomb Alley by the seamen) and so would have to turn back before reaching Malta.
10-Aug-42       Aircraft were flown off to make dummy attacks to test the fire control and air defence radars. Time was also made to practise manoeuvring in convoy. It was felt that the moonless night may mean that the fleet had not been detected.
11-Aug-42       Two fleet oilers were busy refuelling the fleet of warships from 0630 to 2000 as all ships had to have enough fuel to return from Malta rather than deplete the islands stocks. Early in the morning Eagle was hit by four torpedoes fired by U73 but although she sank many were saved but 160 out of a crew of 927 perished. The carrier Furious however managed to fly off 37 Spitfires that flew to Malta as reinforcements (Operation Bellows). When Furious was heading west again one of her escort, Wolverine detected and rammed an Italian submarine which was lost. Up to 1900 four heavy air attacks were flown against the convoy but damage was limited. A merchant vessel had her speed reduced by a near miss, a destroyer was damaged by a torpedo (later scuttled) and the carrier Indomitable had her flight deck put out of action although she could still make 28kts. Slight damage was also caused to the flight deck of Victorious. 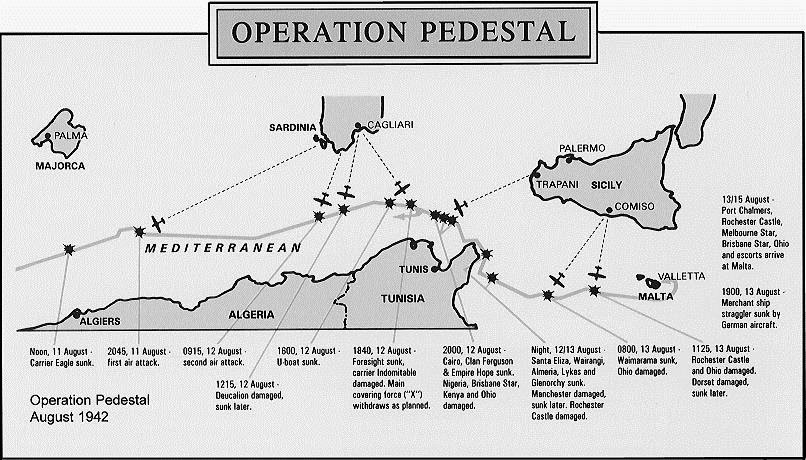 12-Aug-42       Another Italian submarine was rammed by one of the escort destroyers and was badly damaged herself in the encounter. In the morning an air attack was met by the carrier fighters and the heavy ships AA fire also proved a deterrent. At noon further air attacks were started. They were not coordinated very well so there were breaks between however Indomitable’s flight deck was finally put out of action for good. Force Z with Dad aboard Nelson had now reached the Skerki Bank between Sicily and Cap Bon, Tunisia and had to turn round and head back to Gibraltar. Meanwhile the rest of the convoy, Force X, started to form two columns instead of four. Just at this time HMS Nigeria and Cairo and tanker Ohio were hit by torpedoes from an Italian submarine. The two navy ships were to be the two column leaders and with the loss of destroyers to cover the damaged vessels confusion and scattering of the convoy occurred. On hearing of the losses Admiral Syfret ordered Charybdis, Eskimo and Somali to return to reinforce Force X. The confusion in the convoy cost heavily and with a severe air attack between 2035 and 2100 and then attacks from Italian submarines 2 merchant men were sunk and one damaged and a destroyer also sunk.

As Operation Pedestal was so crucial to the war effort I will quickly summarise the next few days of the convoy even though Dad’s ship had now turned back to Gibraltar. A little after midnight on the 13th August 15 enemy MTB’s attacked and with the reduced escort and merchant ships strung out they found easy targets and three cargo vessels were sunk. HMS Manchester was also damaged and later scuttled. During daylight 12 German bombers attacked and another merchant ship was sunk burning debris form which set fire to another vessel and some of the crew abandoned prematurely. She eventually made it to Malta. Later an attack by 60 Stuka dive bombers concentrated on the already damaged Ohio. At this time she was the largest tanker in the world and owned by America but had been loaned to Britain and was manned by a British crew. Near misses buckled her hull plates and No.1 hold had to be flooded. A stricken German plane actually crashed on to the deck of the Ohio and another crashed into the sea but skipped along and again crashed into the ship. But it was a brace of near misses that straddled the vessel

and ruptured her boilers that finally stopped her in the water at 1050. Further air attacks caused more damage but at 1800 Rochester Castle, Port Chalmers and Melbourne Star entered the Grand Harbour in Malta. More air attacks were again aiming to sink the disabled Ohio. HMS Penn was attempting to tow her but the heavy dead ship kept parting the rope. Yet another attack came and when another bomb landed in the same place that the torpedo had struck and the vessels back was broken. The crew finally abandoned ship just as another attack started. 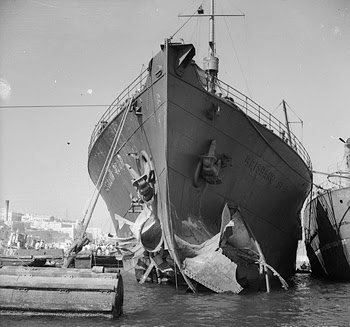 Damage to the bow of Brisbane Star in Valletta Harbour

On the 14th August the badly damaged Brisbane Star limped into Malta. Great efforts were been made to get Ohio into port with her vital cargo. They eventually managed to start making progress by tying HMS Penn and Ledbury to either side to prevent her sinking and using a mine sweeper aft as a rudder as another bomb had holed her stern and damaged the rudder. The whole group finally made port at 0930 on the 15th to be greeted by masses of cheering people on the heads. Her cargo was pumped in to two other tankers and immediately she settled on the bottom of the harbour. 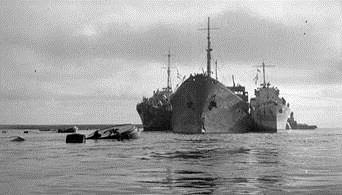 The convoy was said to be a great strategic victory as it was vital that Malta was kept supplied and fighting as it was a base to harass the supply lines to the German Africa Corp. If the Germans had been able to build up supplies it would have been impossible to prevent them taking Egypt and then close the Suez Canal and gain access to the huge oil supplies of the Middle East. This at best would have prolonged the European War or ultimately meant that the Allies would have lost. 400 lives were lost and thirteen ships sunk to get 32000 tonnes of stores plus various fuels to the island as only 5 of the original 14 cargo ships arrived. The supplies were enough for a further 10 weeks above the two or three weeks that already were held. Perhaps the best result of the operation was to stiffen the resolve of the forces and population of the island to continue enduring the constant air raids and deprivations, and ultimately the Island was awarded the George Cross for their efforts.
Vessels taking part were,
2 battleships
4 aircraft carriers (thought to be the only time 4 carriers were involved in the same operation)
7 cruisers
16 destroyers
14 merchant ships

2 enemy submarines were sunk and 1 damaged and 42 out of an estimated 330 planes were shot down. 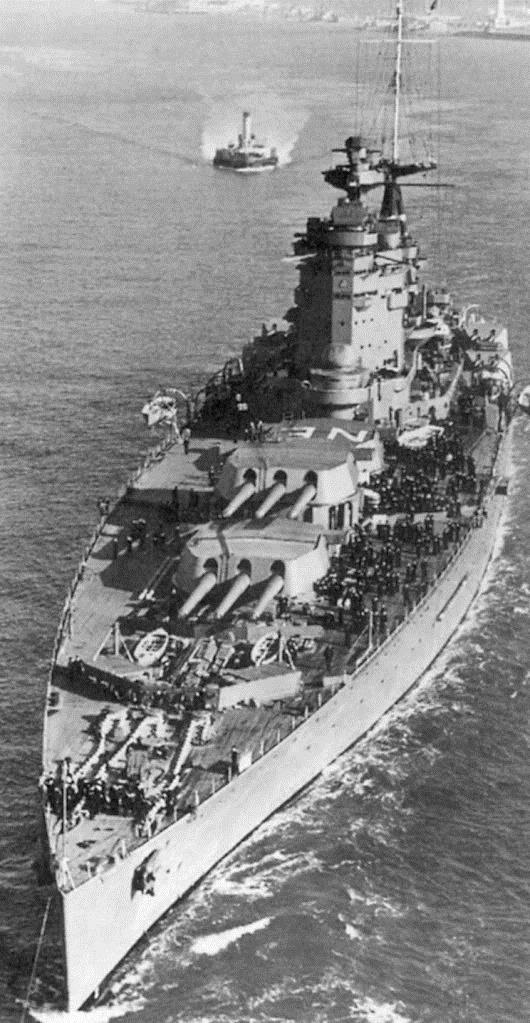 HMS Nelson leaving harbour under tow before the War.

15-Aug-42       Force Z, including Dad on HMS Nelson, arrives back in Gibraltar.
20-Aug-42       Nelson sails from Gibraltar carrying survivors from Carrier Eagle and Cruiser Manchester and accompanied by escort carriers Argus and Furious and cruiser Kenya.
25-Aug-42       Vessels arrive back in Greenock. The ship then moves round to Rosyth on the Firth of Forth for a refit.
26-Aug-42       Dad is to change ships once again, but not too much of a change! 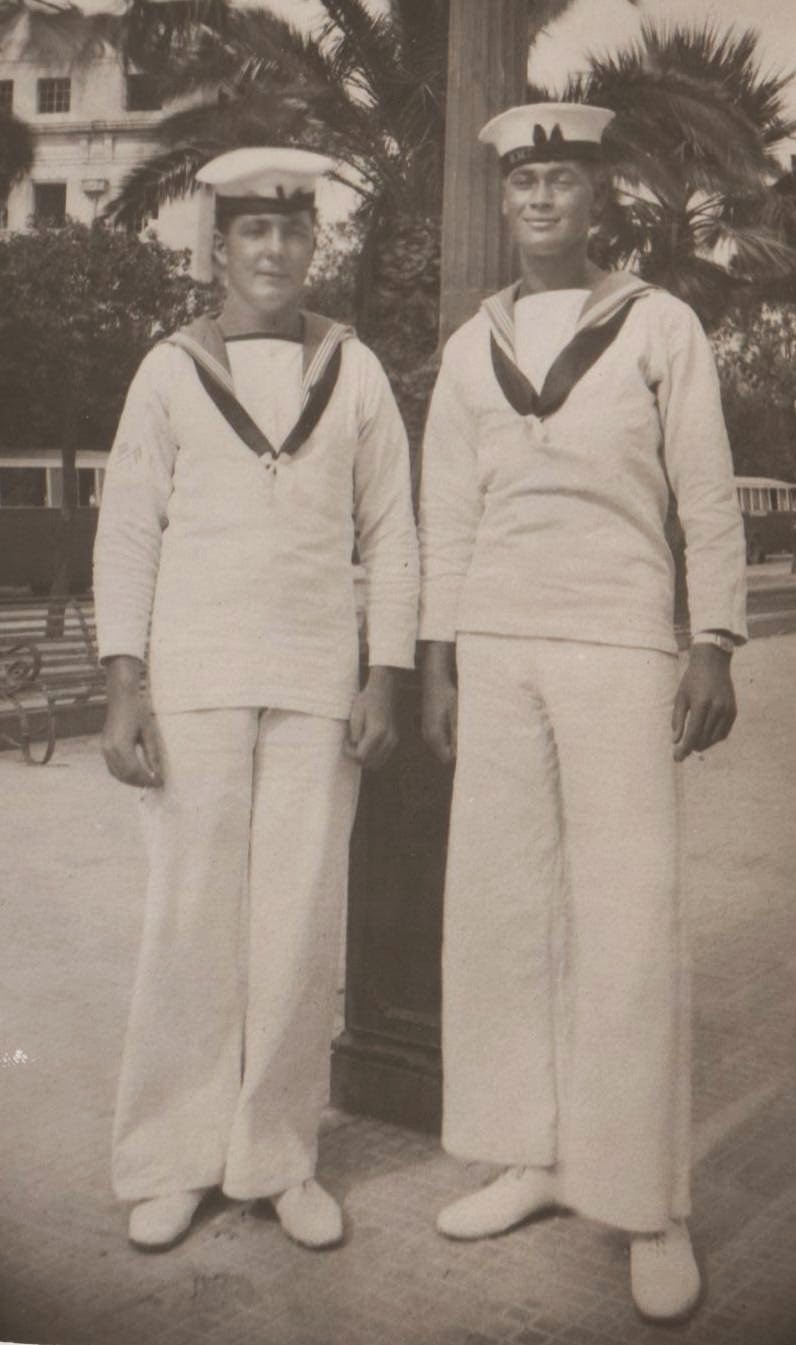 Dad on the right and Jock (John H. Hogg!) I think it looks like Malta. Mum says that they kept in touch with Jock for several years after the war until he died.
Posted by NB Holderness at 10:21